Murfreesboro Police Department responded to an alleged assault on an MTSU student at The Pointe at Raiders Campus apartment complex on Wednesday.

The victim said her roommate’s boyfriend was playing loud music. She told police that she knocked on the door three times, damaging it, and asked the boyfriend to turn down the music, which resulted in an argument.

When she went to get her phone, the boyfriend grabbed it and threw it near the balcony doors. When the victim went to retrieve it, after stating she was calling the cops, the boyfriend blocked her from picking it up. The victim tried to leave, but the boyfriend began to get in her face until she told him to move.

The boyfriend gave her the phone and left. When later contacted, he told police that he had turned down the music, but she continued to knock on the door afterwards saying she could still hear the music. The boyfriend repeated the claims of jealousy, but claimed he did not touch the victim’s phone.

No arrests were made following the altercation. 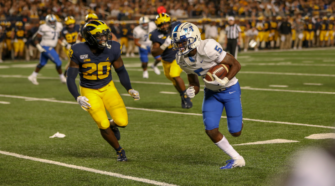