NASHVILLE, Tenn. (AP) — The Latest on the trial for a Vanderbilt University football player who is accused of sexually assaulting a former student in a dorm room (all times local):

A jury has found a former Vanderbilt University football player guilty of raping an unconscious student in a dorm.

It took jurors less than three hours to convict Cory Batey of several counts, including one count of aggravated rape and three counts of aggravated sexual battery. Three other former players are charged with raping the female student in a dorm room in June 2013.

The decision Friday followed five days of testimony and graphic images and videos taken during the sexual assault. Police testified that they recovered the photos and videos from the players’ cellphones.

Batey and former player Brandon Vandenburg were both found guilty last year of the dorm room rape. The judge declared a mistrial after lawyers discovered that the jury foreman had been a victim of statutory rape.

Batey testified that he was so drunk he could not remember the sexual assault.

Jurors have begun deliberating in the case of a former Vanderbilt University football player accused of raping an unconscious female student.

Jurors have seen graphic videos and images throughout this week’s trial. Police have testified that they recovered the videos and photos from the cellphones of the former players.

Batey and another player were tried and convicted last year. The verdicts were thrown out after lawyers discovered that the jury foreman had been a victim of statutory rape.

A former Vanderbilt football player has testified that he was so drunk that he blacked out and can’t remember what happened during an alleged sexual assault on campus.

Cory Batey and three of his former teammates have been charged with raping an unconscious student. Batey is being tried by himself this week on charges of aggravated rape and aggravated sexual battery.

A jury last year convicted Batey and another ex-player, but the verdict was thrown out after lawyers discovered that the jury foreman did not reveal that he had been a victim of statutory rape.

Batey told jurors Friday that he had been drinking heavily with friends on campus in June 2013 and had never consumed so much alcohol in his life. He would later estimate that he had between 14 and 22 drinks.

Batey, who was 19 at the time, said he woke up the next day and saw pictures on his phone of a woman that he had never seen before.

A former Vanderbilt student cried on the witness stand after seeing a photo of herself when she unconscious during an alleged sexual assault.

Police say they recovered photos and videos that the players took on their cellphones during the attack.

The woman testified Friday that she woke up in a strange dorm room alone, feeling sick, not knowing where she was and what had happened to her. Nashville police would later show her some of the images they recovered from the phones.

Next MTSU's two runs late not enough against Southern Miss

AP: Could country’s new class cause an upset at the CMA Awards?

Photos: Nashville residents hold one of many nationwide protests in response to Jeff Sessions’ resignation 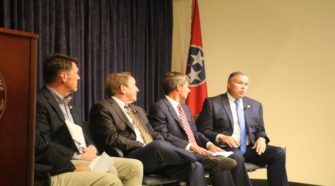