With rumors swirling of more conference realignment, most notably with the American Athletic Conference and teams leaving for the Big 12, Middle Tennessee has expressed serious interest in filling a spot if one comes available.

In an email first acquired by the Daily News Journal, Athletic Director Chris Massaro explained to AAC commissioner Mike Aresco why the Blue Raiders would be an ideal fit if the Conference begins a search for new members.

“I know conference realignment is a topic that we all hoped would be set aside for a few years,” Massaro wrote. “But with the Big 12 rumblings of expansion, it appears the dominoes may fall soon.

In June, it was announced that the Big 12 was considering expanding from it’s 10 current members to 14, potentially. Memphis, as well as Central Florida and Houston, have been rumored as possible additions to the conference.

“We are proud members of Conference USA and work hard every day to improve our standing in C-USA and on a national scale,” Massaro said. “As it has been in the past, we are open to any opportunities that conference realignment might cause.”

Middle Tennessee has acclimated well since joining C-USA, including multiple conference titles, and are coming off one of the better basketball seasons in recent history.

“I will be to the point. If you look at C-USA schools as replacements for American schools who may leave to join the Big 12, you will not find a better fit/candidate than Middle Tennessee State University. No one combines the TV market, with the combined success over the last five years for football and men’s basketball as Middle Tennessee. In fact, the comparisons are not close.”

“Mike, Murfreesboro is truly part of the booming Nashville metropolitan area,” Massaro wrote. “MTSU has a significant presence in Nashville and its TV market as illustrated by our strong NCAA Tournament game ratings.”

Massaro’s biggest selling point is the success that the Blue Raiders have had, most notably in football and basketball in C-USA in the past three years.

“We are built for long-term success, and I assure you we will add to the competitive profile of the AAC. I would also illustrate that MTSU is the strongest women’s basketball program in the conference by a wide margin, so schools like UConn and USF (if they remain in the American) would have tremendous competition. I am confident we can enhance the league (College Football Playoff) standings as well as men’s and women’s basketball RPI’s.” 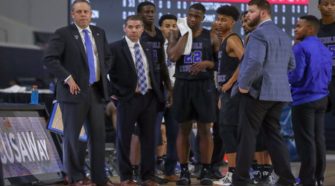