Homecoming 2016 festivities are already underway this week as the MTSU community prepares for Saturday’s game against their rival, Western Kentucky University.

This year’s Homecoming theme is “Raideropoly: This is How We Roll,” with events and competitions styled after classic board games.

“As we compete against WKU, it’s our OPERATION to give WKU a CLUE that they are in for a little bit of TROUBLE. SORRY Toppers, this is a Raider LIFEstyle and you are at RISK of losing the biggest game of the year,” MTSU’s Student Government Association stated in their Homecoming 2016 Rule Book. 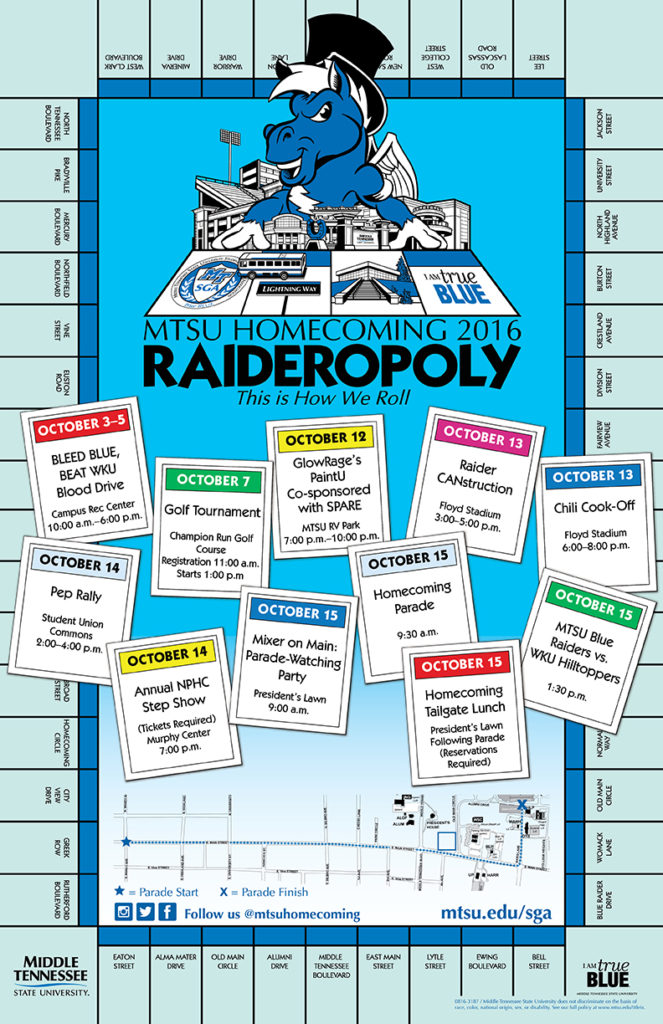 Students have the opportunity to participate in several “Raideropoly” Homecoming activities leading up to the game. During these activities, students will work together in teams divided by residence halls, student organizations and fraternity and sorority life to win the overall competition. Teams will be judged on their performances in this semester’s Fight Song Competition, Paint the Halls Blue, Chili Cook-Off, Profile Picture, Parade Entry, Sign Competition, Canstruction and Intramurals.

All MTSU students can watch the teams compete and get involved in Homecoming week activities by attending the events below.

Student organizations will go head-to-head to create the best board game-inspired design using canned food. The food will be donated to the MTSU food pantry after the event.

Student organizations, alumni and community members will compete to make the best chili and win “Lightning’s Ladle.” Attendees can sample an unlimited amount of chili for $5. Proceeds from the cook-off will be donated to Habitat for Humanity.

With this SGA Homecoming week tradition, students come together to help their Blue Raider football players prepare to win against WKU.

The step show, sponsored by the National Pan-Hellenic Council, features students involved with Greek-life and their family members. Local high school steppers, musicians and comedians will also be invited to show off their talents.

The parade-watching party, hosted by the Alumni Association, will feature music, a bounce house and souvenir photos. Parade entries will be announced by Voice of the Blue Raiders and MTSU Alumnus Chip Walters and MTSU Recording Industry Chair and MTSU Alumna Beverly Keel.

Blue Raiders players and coaches will walk through the Grove two hours prior to kick-off, giving fans a chance to show their support before the game. The trail will be marked with blue lightning bolts.

This year’s Homecoming awards will be announced, and the King and Queen will be crowned.

The Blue Raiders (4-1) will take on the Hilltoppers (3-3) in this year’s Homecoming game.