Urvashi Vaid, an attorney and LGBTQ activist, spoke in the Student Union Building Ballroom on Thursday for Creating Global Change, an interdisciplinary conference in women’s and gender studies, hosted by MTSU’s Women’s and Gender Studies program.

Urvashi Vaid is the CEO and founder of Vaid Group, LLC, a social innovation firm that works to eliminate institutionalized injustices that are based on race, sexual orientation, gender, gender identity and economic status. Vaid founded LPAC, the first lesbian Super PAC, in July 2012. She has preformed philanthropic and social activism work for the Arcus Foundation, the Ford Foundation, the American Civil Liberties Union and the National Gay and Lesbian Task Force, now called the National LGBTQ Task Force.

Vicky MacLean, the director of MTSU’s Women’s and Gender Studies program, introduced Vaid. MacLean spoke about the importance of diversity and the diversity of the conference, saying that participants attended the conference from many different countries, dozens of states and several universities in Tennessee.

Vaid speech, based on her 2012 book, “Irresistible Revolution: Confronting Race, Class and the Assumptions of Lesbian, Gay, Bisexual, and Transgender Politics,” analyzed the complex and constantly changing issues faced by the LGBTQ community and how these issues are impacted by race, religion, technology, economics and politics.

“(He) makes it acceptable to be racially divisive,” she said.

She described the Trump Administration and the Republican Party as enemies in “an ideological battle that is going on in this country.”

“The political agenda is very, very much about mass discrimination,” Vaid said. “State legislatures in this country are governed by people who are against liberty and justice for all.”

In her speech, Vaid also highlighted the importance of technology and how its rapid advancement affects discourse and social justice issues.

“Technology has contributed to this revolutionary moment in many good and bad ways,” Vaid said. “We read traditional journalism less and less. Is it any wonder that we’ve become a nation of distrustful and ignorant people who, at the same time, think we know it all?”

Vaid also spoke about the progress that the LGBTQ movement has made in the past few decades, citing the increase in LGBTQ nonprofit organizations from approximately 50 in 1969 to nearly 600 today.

“The only way we can win is if we transcend identity and unite in shared values,” Vaid said. “Everything we’ve won, we’ve won through coalition work.”

However, Vaid cautioned against complacency with LGBTQ rights victories.

“Every gain that we’ve made is reversible,” Vaid said. “We need a political alliance based on shared values or shared goals.”

Vaid also advised the audience about the importance of voting.

“I believe the only way to win power is by participation in a process,” Vaid said. “We have to win through intersectional politics.”

In attendance was Nathan Gower, a master’s candidate in history at MTSU. He said that he feels speeches like Vaid’s are important to educate the general public, especially in today’s political climate.

“There’s a lot happening in the state of Tennessee, and in the country broadly, but especially in the southeast where these types of discussions about where we stand as a community, where we stand as a movement and where we can move forward are particularly insightful,” Gower said.

The conference continues Friday and Saturday at MTSU with papers, presentations, assemblies, films, panels and workshops.

Next MT Softball falls to TSU on Wednesday 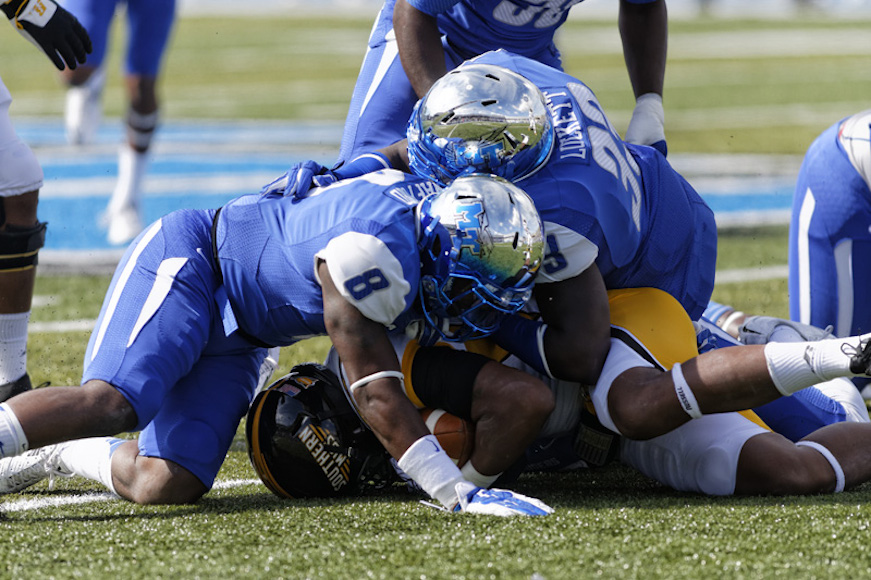