A report by the U.S. Census Bureau last Thursday ranked Murfreesboro as the 10th fastest-growing city in the United States. The data projected a 4.7 percent population growth in Murfreesboro in 2016.

The census statistics ranked each city’s population growth by percentage. It defined “large cities” as cities with a population greater than 50,000.

Exceeding that number more than twice, Murfreesboro’s population contained over 131,000 residents in July 2016, according to U.S. Census Bureau population estimates.

“Murfreesboro is a great city to live, raise a family, run a business and has a great University,” said Mayor Shane McFarland. “Our education system is fantastic, (the) parks and recreation system is considered one of the best in the country (and) we have lower cost of living compared to other communities.”

McFarland said the City’s first priority for the community is safety.

“When you look at the growth, our #1 priority will be continuing to provide a safe environment for all of our residents,” he said. 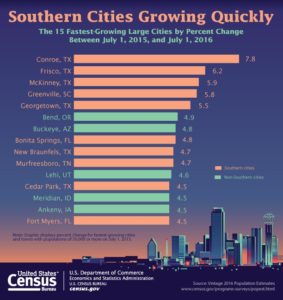 The census report showed that Murfreesboro’s growth trend is not unusual for a Southern city. Of the top 15 fastest-growing cities that made the list, six were in Texas, one was in South Carolina and two were in Florida.

He said all of this has been accomplished without raising City property taxes.

Smotherman, who has lived in Murfreesboro his entire life, said as a child, many needs could not be met in Murfreesboro. A resident had to travel to Nashville for items such as clothing, health services and alcohol.

“Today all those needs need can be met without leaving city limits,” Smotherman said.

The rapid growth in Murfreesboro has prompted the City of Murfreesboro to develop a comprehensive plan for the next 18 years. The plan addresses issues such as infrastructure, zoning, transportation and parks as the city expands. The plan, called “Murfreesboro 2035,” takes comments from the community and has a 20 person task force helping to lay out the vision of where Murfreesboro’s future lies.

“While growth is inherently a two-edged sword, Murfreesboro has continued to look for progressive, innovative solutions to problems,” said City Councilmember Bill Shacklett. “This spirit of collaboration and cooperation has been a part of our community’s DNA for generations.”

“The challenge for all of us is to always nurture relationships that make positive things continue to happen,” Shacklett said.

City Planner Joe Ornelas said one of Murfreesboro’s biggest draws for development is the physical element in the city.

“We have a lot of flat land here,” Ornelas said. He said the large building capacity off roads such as Veterans Parkway

He said the large building capacity off roads such as Veterans Parkway is a big draw to developers.

In addition to the attraction of Murfreesboro’s terrain, Ornelas said that one of Murfreesboro’s biggest draws is the education. An article on an education ranking website, Niche, ranked Rutherford County as the 10th best school district in Tennessee for 2017. U.S. News recently ranked Central Magnet School as the top public high school in Tennessee.

Residents who wish to get involved with city planning are encouraged to attend public hearings and reach out to Murfreesboro city planners by email, telephone or in person at City Hall.