Shanterrica Madden, the convicted killer of Lady Raider basketball player Tina Stewart, filed a third appeal on her case and was turned down according to the Court of Criminal Appeals filings on Thursday.

According to WMOT, an altercation occurred between Madden and Stewart after Stewart called the police when Madden brought home a friend who was smoking marijuana in their Raiders Ridge apartment, currently known as the Vie at Murfreesboro.

The altercation led to Madden fatally stabbing Stewart in the chest.

In Madden’s testimony, Madden wanted to talk things out after the police left, but the conversation became heated. She claims that she “slightly” bumped into Stewart as she was trying to leave when Stewart pushed her, leading to the two fighting. Madden happened to see that a knife was sitting on Stewart’s bed, so she grabbed it while Stewart was on top of her and plunged it into Stewart’s chest.

After calling her friend and her mom, Madden went back to check on Stewart. Stewart was still not moving so Madden became worried. In her testimony, she wrote “I was trying to see which police should I call,” but never did. Madden attempted to dispose of the knife by washing it, wrapping it in a blanket and throwing it in a dumpster. Madden failing to call the police ultimately led the jurors to rule her guilty of second-degree murder in March 2011.

She is currently being held at the West Tennessee State Penitentiary and has filed several appeals since her guilty verdict back in 2012.

In one appeal, Madden suggested that presiding Judge Don Ash should have recused himself. Allegedly, the judge had ties to MTSU and was reportedly Facebook friends with the MTSU Lady Raider Coach, Rick Insell. Madden also claimed that her sentence was too excessive.

In another appeal, Madden alleged that she did not receive effective assistance of counsel, that the evidence was insufficient to support her conviction and that she was denied due process based on impartial treatment towards the defense and improper juror questions.

On March 30, 2016, the post-conviction court found that Madden presented a plausible claim but dismissed the petition due to it being filed outside of the statute of limitations.

All of her appeals have yet to bring about any change toward Madden’s conviction.

According to WGNS News Radio, Madden will be eligible for parole in the year 2036, two years before the end of her sentence. 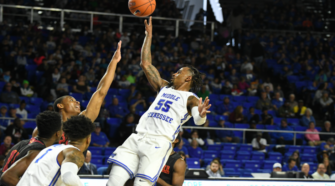