Following a disappointing weekend series that saw the Middle Tennessee Blue Raiders get swept by the Southern Mississippi Golden Eagles, MTSU (21-20-1) looked to get back on track against the Austin Peay Governors (23-18). After falling behind early, the Blue Raiders used a six-run eighth inning to pull away late and win 10-4 over the Governors.

These two teams also played each other earlier in the season with the Raiders walking away with a 9-0 shutout victory.

Down 4-2 in the seventh inning, senior Ryan Kemp tied the game with a two-run single before the Blue Raiders put on an eighth-inning barrage for six runs to go up by the final score of 10-4.

The win wasn’t completely free of worry however, as freshman Myles Christian and junior Austin Dennis collided in the outfield, resulting in Christian being taken off the field on a stretcher.

Pitching keeps the team in the game

Junior right-hander A.J. Spencer got the star on the mound for MTSU, and struggled with his command in his time in the game. Overall, Spencer threw three innings of one-run ball with three strikeouts, but also four walks.

Paulk was relived by freshman Zach Keenan, and in his single inning on the mound, he struck out two and allowed no hits or runs.

Junior right-hander Tyler Holcombe sealed the deal by going three shutout innings with only one hit and a strikeout.

Batting starts off slow, rallies in the eighth

MTSU’s bats were stagnant for the majority of the game, but picked it up late by scoring six runs in the eighth inning to take control.

Part of this could be left over from the Raiders’ previous series against the Southern Mississippi Golden Eagles when Middle only scored three runs in three games. After discussing their offensive futility as a team, the man in charge believes that this team really bought in to what was said.

“The first four innings were almost a hangover from last weekend,” said Head Coach Jim McGuire. “There were some things said in the dugout, and I think I helped.”

Middle Tennessee was held scoreless until the bottom of the fifth inning when junior LA Woodard doubled to score freshman Jake Hagenow.

The Raiders scored again in the bottom of the sixth inning when junior Blake Benefield doubled to send Kemp home to cut the lead in half at 4-2. Kemp then tied the game for Middle Tennessee with his two-run single in the eighth.

That eighth inning, highlighted by senior Aaron Aucker‘s three-run home run, proved to be the difference in MTSU’s 10-4 win over APSU.

“It’s been a bit of a drought, two weeks I think,” Aucker said. “I was frustrated, and it was good to finally get one.”

The blast was Aucker’s ninth of the season and the 20th of his career.

The Blue Raiders will gear up to face the University of Texas-San Antonio Roadrunners, who currently sit at eighth in the conference. The opening game will be played Friday at 6 p.m. 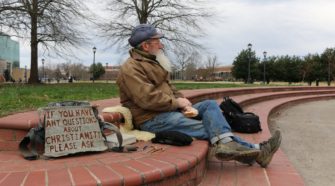