Darlings of British alternative-rock group Basement released their fourth full-length album “Beside Myself” on Friday, and it’s an all-out rock treasure. Basement’s previous discography transitioned through various stages. Their gloomy debut “I Wish You Were Here” started a sepia-toned grunge-emo mood, their sophomore masterpiece “colourmeinkindess” — which was arguably the peak of Basement’s discography — turned the Suffolk-based band’s anguished romanticism rose-colored and the third full-length record “Promise Everything” shifted the mood to treacherous optimism.

Although “Beside Myself” falls more so under a relatively rock tone, the gritty grunginess of their sound has remained as an underlying theme. However, “Beside Myself” is much more reminiscent of early 2000s rock such as Jimmy Eat World’s “Bleed American” and Silverchair’s “Diorama.” Basement’s previous records were filled with dread and a “rainy English gloom.” However, their third record “Promise Everything,” and now “Beside Myself,” switched-up the gloom and doom for a more upbeat, optimistic feel with some angsty undertones.

Basement establishes the intensity of the record with the first tracks “Disconnect” and “Be Here Now.” They are both bright and feature erupting chorus’ that highlight Andrew Fisher’s baritone melodies. Both of these tracks are adept at manifesting the theme of the record which focuses around the almost inevitable battle of retreating inside your own head or pushing to live every moment in the present. “New Coast,” a personal highlight and favorite, “Just a Life” and “Right Here,” the heavy closing track, are strangely evocative of a melodies featured on “Promise Everything” and “colourmeinkindness.” “New Coast” and “Just a Life” host identical guitar melodies as “Promise Everything’s” infectious “Aquasun,” and “Right Here” has the gloomy romanticism and harsh grunge-feel that is woven throughout “Covet,” and others, on “colourmeinkindess.” “Slip Away” is full of alternative dissonance, highlighting Duncan Stewart’s hulking bass lines, which feel in perpetual conflict with Fisher’s exigency to vanish.

Although their grunge revivalism seemed to flourish with their 2012 release “colourmeinkindess,” “Beside Myself” offers a 2018-esque establishment into the rock world. It seems as if Basement has always been on the cusp of different on every record that they’ve produced, and it always turns out in their favor. The stylistic efforts of Basement are in high gear right now with “Beside Myself,” and the evolution of their sound is only continuing.

Previous Review: Kurt Vile toes line of self-indulgence with ‘Bottle It In’ 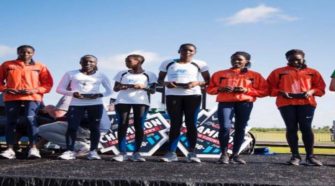