Students and the public gathered at the Hinton Music Hall Saturday for a night of cultural appreciation and awe as the Fengyun’s Women’s Choir joined the MTSU Women’s Chorale in a stunning performance.

The concert, titled “The Grand Song of the Dong,” featured the group of six women from the Dong people in Guizhou Province, China, alongside the MTSU Women’s chorale.

This event was coordinated by the MTSU Center for Chinese Music and Culture as part of the second Murfreesboro Festival of Chinese Arts.

The Dong people “pass on their culture and knowledge through the Grand Song, a multi-part singing tradition,” according to a publication given out at the event.

“(Their) songs constitute a Dong aural encyclopedia, narrating their history, extolling their belief in the unity of humans and nature, preserving scientific knowledge, expressing feelings of love and promoting values…” the publication continued.

Throughout the many traditional songs performed, like “O Hei Ding,” “Song of the Gogi” and the “Cicada Song,” even the most unappreciative viewer would have a hard time not gaping in awe at the sheer talent of the singers. It was a work of coordinated harmonies and cultural complexity that struck a note with many students.

Sawyer Vals, a classical guitar major in the School of Music, was very impressed by the cultural authenticity.

“I came here because I like to go to concerts that are specifically different from the culture that I’m used too and things that give me more experiences in different musical cultures,” he said. “… It’s important as musicians (to learn about other culture) because it helps us understand better the context of the music that we play.”

This event and many more will make up the Chinese Cultural events here in Murfreesboro throughout the duration of February for the Murfreesboro Festival of Chinese Arts, hosted by MTSU’s Confucius Institute and the Center for Chinese Music Culture.

More information regarding this year’s events can be found here. 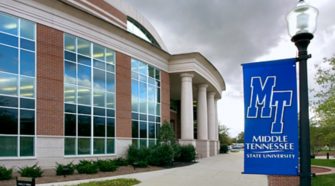