It’s been five years since Hozier’s self-titled debut album was released, but it’s safe to say his new album,“Wasteland, Baby!,” was worth the wait.

The 28-year-old has crafted an album that perfectly fits his deep and powerful voice. Each song on this album demonstrates his growth as a musician. Hozier successfully establishes the familiar folk tone that he’s known for in songs like “Nina Cried Power” and “To Noise Making.”

Hozier uses his voice to praise jazz elites, such as Duke Ellington and Chet Baker in “Almost.” The song is easily the sweetest, most loving song on the album, explaining how Hozier feels more like himself when he listens to music with his partner, and how with each song she plays for him, he falls more in love with her.

“Shrike” is the opposite of “Almost:” It is soft and tells the story of a failed relationship. Hozier’s sharp lyricism is displayed multiple times in the song. The song’s opening line, “I couldn’t utter my love when it counted, but I’m singing like a bird about it now,” prepares listeners for the heartbreaking story to come.

The entire song is sung in the lightest voice over a faint drum and guitar combination. The intimacy of the lyrics and vocals easily makes this song a fan favorite.

Hozier challenges “Take Me to Church” in “Be,” the song has the same modern folk – soul theme with a memorable baseline throughout its entirety. The Irish singer belts out lyrics begging for love to remain the same as before while also reminding listeners of the album’s title with lyrics of a battered and desolate land.

“Dinner & Diatribes” is sexy yet cautious. It tells the story of Hozier meeting a young lady and knowing almost immediately she would be troublesome, yet not being able to stop himself from pursuing her. Hozier explains throughout the song that he knows she will be a bad influence, but it’s the kind of love he has been dreaming of.

The song continues with Hozier screaming out lyrics of noise complaints from neighbors and tabloid news of their relationship but being so captivated by the young lady that he is okay with it.

Returning once again to his modern folk sound, Hozier sings of a failed relationship in “Would That I.” The song begins with delicate vocals, singing of gardens and fires but quickly becomes the opposite as he nears the chorus. Hozier uses the upbeat chorus to explain that the heartbreak is in the past and he will soon be ready to love again, before returning to another sorrowful verse.

“Wasteland, Baby!” perfectly shows that within five years, Hozier has become a better lyricist with a powerful voice to match. The album’s intimacy will last for eternity, which is not something that can easily be accomplished.

Hozier did not only meet today’s musical standards, he met tomorrow’s. The creative dissonance of this album compared to Hozier’s debut album is tremendous but also allows for there to be no comparison of the two.

Hozier will be bringing the Wasteland, Baby! Tour to Nashville on March 24 at the Grand Ole Opry House, with special guests Jade Bird. More information can be found here.

Anderson .Paak follows up his 2018 album with latest LP, ‘Ventura’

Witches of Middle Tennessee: Unpacking witchcraft, its rise to popularity 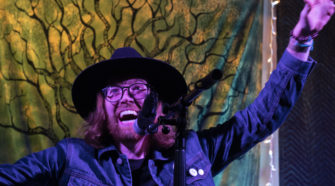