Opening Day. Thursday, March 26: the day that I, a lifelong Atlanta Braves fan, had been eagerly awaiting ever since one particularly gut-wrenching Wednesday evening early last October when the Braves bowed out of the postseason with a 13–1 loss to the St. Louis Cardinals.

I plopped down onto the couch, wearing my faded navy blue and red-billed hat with the dirty, worn cursive “A” on the front, turned on the TV and navigated my way over to the Braves’ game against the Arizona Diamondbacks. Quite the matchup on the mound between the two starting pitchers—Hall of Famers Greg Maddux and Randy Johnson.

Both legends lived up to their billing. Maddux overcame a first-inning run to give up just one more over seven full innings for the Braves, while Johnson pitched a complete-game shutout and struck out 11 for the D-Backs. The legendary pitchers’ duel ended in a 2–0 victory for Arizona. The loss wasn’t so bad for me to take, considering I had seen it before, 19 years ago, to be exact. The game was Game 1 of the 2001 National League Championship Series.

True, the Braves were scheduled to play the Diamondbacks on March 26, but baseball, like everything else, has been put on hold due to the COVID-19 pandemic.

The unprecedented stoppage of the sports calendar has left many sports fanatics, myself included, with a massive void in our entertainment schedules, inconveniently at the exact time that most of us have nothing but free time to fill.

But I have stumbled upon the perfect remedy to help turn those proverbial lemons into lemonade.

When the NBA announced they were suspending the season on March 11, I agreed with the decision and knew that all other sports would soon follow suit. I told myself that it was not that big of a deal and that sports were not that essential of a thing, given the full gravity of the situation. Nonetheless, within days this sports junkie was experiencing withdrawals. I turned to YouTube in search of old game highlights, starting with my favorite NBA team, the Memphis Grizzlies.

Eventually, I came across footage of the first game I ever attended in-person: a 2003 game against the Lakers, in which Kobe Bryant scored the game-winning basket at the final buzzer. Overcome with an extreme rush of nostalgia, I called my dad, Ray Aldridge, to reminisce on one of our greatest father-son memories. Though we always discuss current sporting events, this kicked off a lengthy discussion about old games and players across all sports that neither of us had thought of in years.

The following day I turned back to the internet for my sports fix. I found a video of a fully intact broadcast of a 1978 Monday Night Football game between the Miami Dolphins and Houston Oilers, featuring my dad’s all-time favorite football player, Earl Campbell.

I watched the entire game, commercials and all. I found myself looking up stats and bios for the players in the game, some of which I was already familiar with. Others, I was being introduced to for the first time. For all of them, I was watching them play raw and uncondensed for the first time, which allowed me to observe their tendencies and specific skillsets. I could finally appreciate what my dad means when he compares current Tennessee Titans running back Derrick Henry’s running style to Campbell’s.

Now, I watch a full classic game of some sort of sport every day and do a full statistical and background deep dive along with it. When I call my dad to discuss my exploits, it always leads to an interesting stroll down memory lane. It has been a great way for us to stay connected and bond with each other, despite not being able to visit face-to-face.

At the mention of Chipper Jones, my favorite baseball player as a child, my dad was quick to remind me of the time when I was playing third base in Little League. Following a particularly painful mishap with a line drive in which I truly learned why they call it the “hot corner,” he convinced me to start wearing a protective cup by telling me, “Chipper wears one.”

Perhaps the greatest thing about sports is that they bring us together, regardless of race, creed, religion or age. They hold the ability to produce great drama and those oh-so-precious moments in life—in which you remember where you were and who you were with when they transpired—without the serious ramifications that other things of the like can include.

So, sports fans, my advice during these trying times is to utilize the free time to your advantage. Grow your knowledge of your favorite leagues and teams’ past. Learn about the pioneers of the games, the ones whose shoulders the current stars stand upon in order to reach new heights. Reflect on the past moments that gave you so much joy as a fan and laid the foundation for your love of the game in the first place. And, most importantly, enjoy those memories with those you share them with.

Next The Blues are the roots: Bill Steber's journey to capture the essence of the Delta 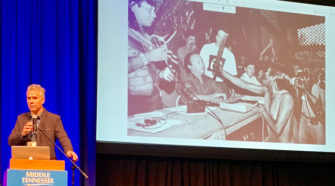