The Honors College at Middle Tennessee State University will be a virtual host for two lecture series this semester. 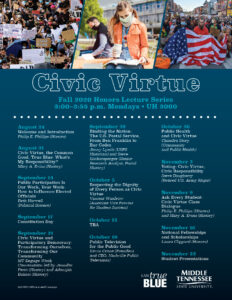 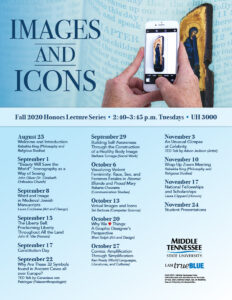 “Most of the lectures will be delivered synchronously via Zoom, but a few of them will be prerecorded and made available to the

In the past, the public was invited to attend any in-person lectures, but due to Covid precautions that’s not an option this semester. However, Phillips said most of the lectures will be posted online and made available to the public.

The decision to have two lecture series is due to the high demand for the course since many students need the course in order to count for a credit towards their minor or to graduate.

With the student’s safety as top priority, Associate Dean Phillips stated, “The Civic Virtue series will be examining how to ‘promote the general welfare’ for the community.”

On Monday, Sept. 14, a special lecture will be given by MTSU’s Distinguished Visiting Lecturer, Beth Harwell entitled, “Public Participation is our Work, Your Work: How to influence Elected

Harwell was a state representative and served a lengthy term as Speaker of the House of Representatives.

“In this course, we are examining how we ‘promote the general welfare’ for our community, albeit sometimes at the cost of our own individual preferences,” said Evins, whose areas of expertise are social, political and women’s history.

“There is no greater symbol or metaphor for civic virtue in the present day than the humble cloth face mask,’ continued Elvin.

A scholar of religion with expertise in Christianity, King said “Icons served as an important venue to both communicate and generate religious ideas or ‘truths’. In the early church, before widespread literacy, there were also beautifully crafted works of art that were capable of evoking experiences

beyond the constraints of language.”

King said she will be asking students “to think about the images that surround them and how they relate to them.”

She continued, “I am hoping that we will be able to capture this moment in time in which images are taking back the prominence that has been held by written texts since the introduction of the printing press, mass communication, industrialization and modernity. I want us to think very intentionally about what types of icons we find around us, how they communicate with their audiences and what they tell us, if anything, about who we are and what it means to be human.”

Previous Chadwick Boseman, "Black Panther" and "Get on Up" star, dies at 43

Next SGA Elections Paused But Will Resume