Thursday night’s edition of the Live on the Green series, hosted by Lightning 100 FM, began with a threat of severe thunderstorms for the evening, but the warnings could not dampen the spirit of many concert-goers.

This week’s opening bands, All Them Witches and The Features, both hail from the Nashville area and got the night off to a steady start, albeit a little late.

All Them Witches started their set just after 6:30 with their special brand of “Psychedelta Blues.” However, within ten minutes of the start of the show, rain began to steadily fall. A group of hula hoopers danced near the back of Public Square Park’s lawn as the storm grew stronger, eventually pushing the crowd to grab their things and run for cover.

All Them Witches ended their set due to a rain check just before 7 p.m.

Live on the Green officials initially anticipated the rain to end by 7:25. However, the rain continued to fall steadily heavier until nearly 7:45. With puddles forming on the green, many took the break to play in the mud. With people wrestling and dancing in puddles, many left their hiding places under beer tents, overhangs and elevator lobbies to join in on the fun.

Shows restarted around 8:30 with The Features ready to face the soaked, but excited crowd.

With a crowd that had little to do but wait on the upcoming performances during the rain delay, energy was high by the time the Sparta, Tennessee indie rock band took the stage to play their five-song set.

Finally, Capital Cities capped off the night with their performace filled with synchronized dancing to rival that of ’90s boy bands.

They included fan favorites, “Kangaroo Court,” “I Sold My Bed, but Not My Stereo” and “One Minute More” from the band’s 2013 release In a Tidal Wave of Mystery.

Capital Cities also included a few cover songs to make attendees of all ages feel at home. The band included the Bee Gees’ “Stayin’ Alive” halfway through the set in a medley with Weezer’s 1994 hit “Undone — The Sweater Song.”

The final song of the set was, of course, the 2013 hit “Safe and Sound.” However, the show didn’t end there. After trumpeter Spencer Ludwig bolted from the stage in into the crowd for the majority of the song, several members of the band followed suit.

“We have a Capital Cities tradition,” he said as the song wrapped up. “I need everyone to remove one piece of clothing. We’re gonna party. I need to see some skin.”

The set ended with a crowd of half-dressed, rain soaked fans screaming to a remix of “Safe and Sound” as the band danced off stage. 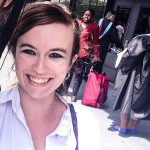