If you’ve listened to the radio in recent weeks, you’ve probably heard advertisements for and against Amendment 1 that both say the other side is lying. What is really a debate over the enforcement of abortion regulations has turned into a show of pro-life vs. pro-choice views.

That is not even what the amendment is about.

The amendment says that, “Nothing in this Constitution secures or protects a right to abortion or requires the funding of an abortion. The people retain the right through their elected state representatives and state senators to enact, amend, or repeal statutes regarding abortion, including, but not limited to, circumstances of pregnancy resulting from rape or incest or when necessary to save the life of the mother,” according to the Tennessee Government website.

It should be made clear that abortion cannot be made illegal in any state because of Roe vs. Wade. Abortion can be regulated, but it cannot be banned. It is against federal law.

If passed, the amendment will not immediately change the status of abortion, but it will open up the door for legislators to enforce and change regulations on abortions in the future by neutralizing past rulings by the state Supreme Court that found abortion regulations unconstitutional.

A “yes” vote will give legislators power to pass laws that restrict or change abortion practices in the state. A “no” vote will leave the state constitution the way it is.

According to yeson1tn.org, voting “yes” on Amendment 1 will require inspection and regulation of abortion facilities. Proponents of the amendment repeatedly have stated that there is zero regulation on the seven clinics in the state, but this is technically not true.

Five of the seven clinics in the state are regulated and inspected by the Tennessee Department of Health as ambulatory surgical treatment centers, such as the Knoxville Center for Reproductive Health as well as Planned Parenthood, according to the state’s health department website. The other two clinics are private practices and are regulated and licensed by the Board of Medical Examiners.

Proponents should better explain their position by bringing up the enforcement issue.

Amendment 1 will allow legislators to enforce regulations already in place, but the danger is that it also opens the door to pass regulations that make obtaining an abortion more difficult.

The state has one of the highest abortion rates in the South, as well as one of the least regulated, in turn making it a leading destination for out-of-state abortions. According to the Center for Disease Control and Prevention, 24.5 percent of abortions in Tennessee were performed on patients from another state in 2010.

The government cannot legislate morals, but sadly Amendment 1 has turned into a pro-life vs. pro-choice debate for uninformed voters.

In a state where conservatism and religion shape the way voters view abortion, Amendment 1 is being pushed under false pretenses as a means to further control how abortions are carried out in the state.

While abortions cannot be made entirely illegal, under Amendment 1 the door would open for heavier regulations that could make it close to impossible to obtain an abortion.

The legislation should be rewritten to specify what regulations would be enforced rather than the broad language we currently see. Voters need to have more information as to the intentions of their legislators.

If lawmakers wish to enforce “common-sense” regulations such as the sterilization of equipment and safety of abortion procedures, this needs to be specified. Since it is not, voters are left to fear of an over-reaching government that could abuse its power if left unchecked with vague, sweeping language that is currently seen in Amendment 1. For this reason, I suggest a vote of “no” on the amendment as well as a revision and specification of it’s language. 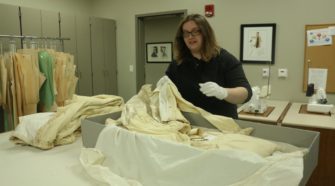 Historic Clothing Collection: A firsthand exploration of history through fashion