The 26-year-old rapper, whose real name is Bobby Ray Simmons Jr., discussed several aspects of his career including his most personal songs (“I’ll Be in the Sky, “Beast Mode” and “Don’t Let Me Fall”) and his favorite artist he’s worked with recently, Pharrell.

He also talked about how his creative process has changed from recording in a basement when he was unknown to being signed by Atlantic Records and working with artists such as Taylor Swift, Bruno Mars and Eminem. While his recording space may have changed, his “creative space” is back where it all began.

“[After you make it big,] it no longer becomes about the money, so then you go back into the creative space where you’re making music just to make music,” he said in an interview. “That’s kinda where I’m at now. I feel like I made a full circle.”

That creative drive is what pushes the rapper, who is currently touring and recording a follow-up to 2013’s Underground Luxury, to keep working on new material.

“I just have to make music. It’s like a nervous itch,” he said. “No matter what accomplishment I have, I’m still gonna wanna try to make good music.”

Next Student Showcases the World of "Eric the Doll" 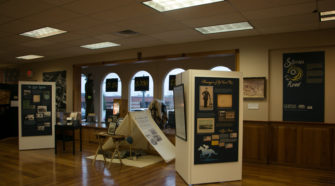