After dropping an eighth consecutive series game to the Alabama Crimson Tide, the Tennessee Vols (3-5, 0-4 SEC) will travel to Williams-Brice Stadium for an annual matchup with the South Carolina Gamecocks (4-4, 2-4 SEC).

While the 34-20 loss was not pretty, the Vols finally found some answers at the quarterback position.

Nathan Peterman started the game, but was pulled after two series in favor of sophomore Josh Dobbs.

Down 27 early in the second quarter, Dobbs led Tennessee to 17 unanswered points before a late Derrick Henry touchdown sealed the game.

Due to a shoulder injury to starter Justin Worley, Dobbs will likely get the start this weekend.

In his only game of the year, the Alpharetta, Georgia native is completing nearly 60 percent of his passes, throwing for two touchdowns and only one interception. The sophomore also rushed for 75 yards against a stout Alabama defense.

The running game finally got going against the Tide. While it may not have shown on the stat sheet, freshman Jalen Hurd had possibly his best game as a Vol, rushing for 59 yards and catching six passes for 27 yards. Senior Marlin Lane had only three carries, but broke one off for 44 yards, nearly scoring a touchdown.

The trio of Dobbs, Hurd and Lane should have a field day with a South Carolina defense that has surrendered almost 210 yards per game to opposing offenses.

Marquez North seems to be shaking his sophomore slump. Josh Dobbs hit his roommate four times for 56 yards, almost connecting with him on a late touchdown pass.

Pig Howard also had a solid game, catching four passes for 49 yards. The two touchdowns of the day went to Von Pearson and Josh Malone.

The Gamecocks pass defense is not that great either, and Dobbs may get in a rhythm early and potentially expose a defense that has been shaky all year.

For the first time all year, the offensive line looked solid against one of the best lines in college football.

The offensive line had to be rebuilt from the previous week with injuries to Coleman Thomas and Marcus Jackson. Brett Kendrick and Jacob Gilliam, who is playing on a torn ACL, looked solid against a great defense.

Look for the line to continue their minimal success against one of the weaker pass rushes in the SEC.

Last Saturday, the Auburn Tigers narrowly defeated the Gamecocks by a score of 42-35.

It could be contributed to an inept Auburn defense, but Dylan Thompson and the South Carolina offense were clicking on all cylinders.

Thompson threw for 402 yards and five touchdowns, but also threw three picks in the process. The senior quarterback has struggled with reading defenses, and a few simple errors cost the Gamecocks the game.

Tennessee’s secondary has been one of the strongest points of the defense, and Saturday should be no different. Cam Sutton, LaDarrell McNeil and Brian Randolph are all having fantastic seasons so far.

After an All-SEC caliber season in 2013, running back Mike Davis has been inconsistent in 2014.

He is, however, averaging more than five yards per carry and looks to bring a strong performance into Saturday’s game against the Vols. If there were a weak point of the Volunteer defense, stopping the run would be it.

Led by Pharoh Cooper, Nick Jones and Shaq Roland, the Gamecocks’ receiving corps has been formidable against opposing defenses.

The trio has combined for nearly 1,300 yards this season and 14 touchdowns. The two strong points of the South Carolina offense has been their receivers.

The strong point of the Tennessee defense has been the secondary. Whichever unit plays better Saturday night will likely control the ball game.

There has not been a bigger turnaround for Tennessee since 2013 than the defense.

The unit as a whole is light years ahead of where they were last year. They are much faster, and are getting more pressure on the quarterback.

A.J. Johnson may win the Butkus Award due to his stellar play this season. He leads the Vols with 86 tackles, while also racking up 8.5 tackles for loss, an interception, a sack and two forced fumbles.

Cam Sutton leads the team with four interceptions, and has anchored a secondary that is surrendering a mere 181 yards per game. Derek Barnett leads the pass rush with four sacks.

Defensively, the Gamecocks rank dead last in the SEC in sacks, and 12th in interceptions. They have given up the most rushing yards in the conference with 208 yards per game and rank 13th in the SEC in passing yards allowed.

They have struggled all year on defense, but their offense has been proficient, and that’s what has kept them in games. If the defense can’t manage many plays on Saturday, the improving Tennessee offense will dominate the game.

Esports Arena bringing the future of sports to the mid-south 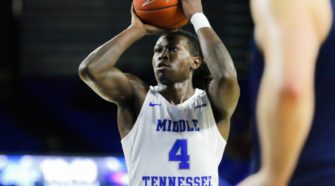