UPDATE: Kennedy is a part-time transfer student who enrolled in nine hours at MTSU this semester. This was his first on MTSU’s campus.

UPDATE: George Davon Kennedy Jr. is in Bay Co. Jail and was charged with first degree sexual battery by multiple perpetrators and is being held with a $75,000 bond.

Middle Tennessee State University has officially confirmed George Davon Kennedy, who was arrested in Dekalb Co., Georgia on Tuesday night, is a student of the university.

Kennedy, 21, a freshman in Behavioral and Health Sciences, was one of three suspects arrested in connection to a gang rape that occurred beachside behind Spinnaker in Panama City Beach, Florida, according to the incident report filed by the Bay County Sheriff’s Office in Florida.

According to a press release from the Bay County Sheriff’s Office, Kennedy was the third suspect seen in video footage of the gang rape in PCB at which point a warrant for his arrest was obtained. BCSO Investigators learned of Kennedy’s family in Georgia and made contact with the Dekalb County Sheriff’s Office.

The DCSO located Kennedy in their county and arrested him on a charge of Principle to Sexual Battery by Multiple Perpetrators, according to the release.

The incident report details that video footage of the incident “depicts several individuals sexually battering a female that appears to be incapacitated.” The Bay County Sheriff’s Office then made contact with the female victim who advised she had come to PCB and “recalls that she blacked out at some point during the day and didn’t recall much about that day, but remembers having to get assistance to get back to where she was staying,” according to the incident report. 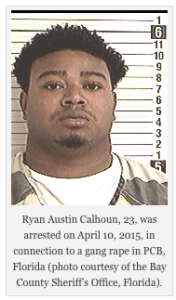 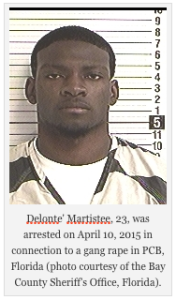 According to the release, the BCSO was able to identify two suspects and arrest them. The suspects arrested were Delonte’ Martistee, 22, of Bainbridge, Georgia and Ryan Austin Calhoun, 23, of Mobile, Alabama. Both were charged with Sexual Battery by Multiple Perpetrators.

The investigation is ongoing and BCSO anticipates further arrests.

Next Competition the Theme for Blue Raider Offense