Hiding away in the basements, living rooms and backyards of Murfreesboro rental homes is one of the most progressive, tight-knit yet expansive artist communities in the country: the Murfreesboro house show scene.

A house show is exactly what it sounds like: a show held in a house. A typical house show is where a few roommates decide to invite bands to put on a concert in their home and everyone invites their friends to watch.
There is a tradition of planning, playing and hosting shows that dates back decades.

Most house show venues are clustered near to campus, and many are passed on from friends to friends over the years. They have memorable names, some including Terminus, Purr Palace and The Mothershack. Many remain a staple for a while as others eventually cycle out.

Hundreds of artists have performed at house shows over the years, and many show experiences are kept between the few gathered in whatever living room they were happening in at the moment.

Legend has it that the White Stripes, Kings of Leon, R.E.M., of Montreal and others played elusive house shows in Murfreesboro, pre-fame.

The scene itself exists thanks to MTSU’s RIM program. Artists from all over the country come to the area to start careers in music business, audio production and the like.

“What really sets apart Murfreesboro’s house show scene is the perfect storm of it being a big suburb of music city and MTSU’s RIM program that attracts musicians from all around the country,” Mitch Knabe of former band Groove Circus told Sidelines over e-mail.

Murfreesboro is unlike most other local scenes anywhere else in that it doesn’t hone in on one trademark genre; it consists of several music communities that work together. This creates a vibrant, diverse community of both musicians and music fans.

“There’s a much greater sense of unity here than there are in other places,” said Alex Cunningham, a local promoter and musician told Sidelines. “Even though there are different scenes in Murfreesboro, they all kind of work in tandem to generate one larger whole.”

The house show scene consists of EDM producers, punk, hardcore and emo bands, jazz, reggae, piano rock, jam bands, singer-songwriters, hip-hop artists and even some unclassifiable bands.
“I love how artistic-minded Murfreesboro is compared to Nashville. People have this mentality that you’re trying to make it big, whereas Murfreesboro is more of a niche thing,” said Jake Umberger of local band Tomato Face. “It’s like, ‘Here’s a bunch of artists I met at school, we’re making crazy music and playing it on Fridays and Saturdays and everyone’s having a great time.’”

“That’s part of what makes Murfreesboro Murfreesboro … the diversity and volatility of the music scene,” Cunningham said. “You can’t put a dog collar on punk rock.”

With this volatility comes a cyclic nature of things. However, the beauty of the house show scene is its ability to adapt and stay relevant over time.
Bands move to Nashville and beyond and people graduate college and buy real homes. There may be lulls at times, but the scene is regenerated again and again by people who care about having an open, non-judgmental space for creativity. There are no rules for how things are supposed to be done; this makes it a little bit harder to continue things when leaders move along, but that’s the very spirit of DIY.

“More people need to be actively involved in the scene to prevent [this from stopping] when people leave,” Umberger said of his experience.

Going to a house show is a right of passage for music fans in Murfreesboro. They’re an intimate experience unlike anything you’d find in a venue.

“The biggest advantage of a house show, I would say, is the intimacy,” Knabe added. “You are not up on some stage looking down on everyone, you are standing on the same shag carpet or laminate flooring as everyone else and you can see how much your peers [are] loving or hating your music.”

These shows may not hold a polished charm and may not always go perfectly, but every show-goer or band member in town has an arsenal of anecdotes of personal experiences.

“I’ve seen a handful of shows in Murfreesboro that just … if a show can change your life, those shows have changed mine,” Cunningham said. “And that’s at a house that three dudes live in. It doesn’t have to be at [Bridgestone Arena] to be a changing experience.”

MTSU senior Josh Ciminnisi, a music business major, has been attending house shows since his first week of college. He says his favorite part of the scene is the “friendliness” of those who attend the shows.
“People coming together and making a good time but supporting each other … it’s just a very kind [and] loving scene.”

There’s no way to fully understand the house show scene without submerging yourself in the experience — an experience based on the principles of DIY and community. Murfreesboro hosts one of the richest and wide-spanning scenes in the nation and brings together people who normally wouldn’t meet into one artistic space.

To sum it up quite perfectly, Cunningham said, “People prefer different types of musical experiences. There’s something particular about this one, and that’s all it is. It’s ours.”

This story appeared in our April 20 print edition.

For more events and updates, follow us at www.mtsusidelines.com, on Facebook at MTSU Sidelines and on Twitter/Instagram at @Sidelines_Life.

Previous 6 ways to stay motivated and achieve your goals

Next Gourmet Recipes for dorm life: quick and easy meals that won't break your bank 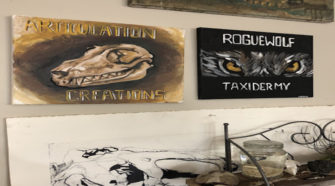 The art of taxidermy: Breathing life back into the dead