The university is required by Title IX to launch an investigation when equity complaints are filed. The U.S. Department of Education Office of Civil Rights is still investigating the complaints.

The university’s investigation, headed by Assistant to the President for Institutional Equity Marian Wilson, found the university guilty of:

“We are pleased that the review determined only three of the allegations were founded – and those had been identified before the questions were raised,” McPhee said.

The investigation, which began in November 2015, was prompted by the former volleyball coach, Matt Peck, filing 28 allegations against the athletics department. Among the 21 complaints discredited by the University, Peck claims that various members of the MTSU athletics coaching staff and administration were mistreating female faculty and students through unequal pay, inappropriate relationships and degrading commentary.

Below is the university’s full report of the 28 complaints.


Peck, who was in his 12th season with the team, was fired on Nov. 2, two days before filing the complaint against the university.

Following his termination, Peck posted on Facebook saying that MTSU Athletic Director Chris Massaro fired him as a “retaliation plain and simple.” Peck also seems to have alluded to the later-filed complaints against the university saying “some very ugly things regarding the Athletic Department and University are going to come out.” 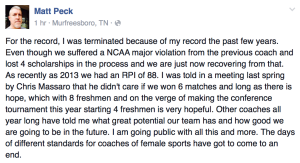 According to Peck, the university and the coaches currently employed didn’t include information about the inequity across the athletics department to “save face.”

“They’re trying to protect the university and–to be honest– some of the things they said or didn’t say were comical,” Peck said. “Wilson’s job is to partially investigate things, but mainly to do damage control. That’s what happened; a partial investigation.”
Peck made further accusations about the university, Athletics Direct Chris Massaro and his successor, Dan Ahiers, who resigned as volleyball coach last week. Sidelines is investigating these claims and will update the story as details are confirmed.

Next Last week of voter registration on campus