The second annual “Raiderthon” took place Thursday in the Campus Recreation Center to raise money for the Children’s Miracle Network.

Kristen Perry, an MTSU senior and the founder of Raiderthon, explained that Raiderthon is MTSU’s first dance marathon program. The Raiderthon is where students sign up to dance for four hours straight in an effort to help raise money for Vanderbilt Children’s Hospital. It is held in honor of all the children who are fighting their health battles every day of their lives.

“It’s important to me specifically because I stayed in a Children’s Miracle Network hospital as a child, but I think it’s really important that we work to keep a resource like Vanderbilt Children’s Hospital right in our backyard. Because coming to this event, we have several local families, and you can see the benefit that people in our community are receiving from this hospital,” Perry said.

She also stated that last year they raised over $3,300 for the hospital, and their goal for this year is $10,000. Perry is confident that they are going to exceed that goal.

“100 percent of the proceeds go directly to Vanderbilt Children’s Hospital. We don’t keep any of that money, so this entire event is put on by donations,” Perry said.

Betsy Perry, Kristen’s mother, was out helping Kristen with the event by managing a silent auction booth.

With the silent auction, people bid towards items that have been donated to the Raiderthon, like makeup products, T-shirts and artwork created by a child named Chase that is currently in the Children’s Miracle Network program. 100 percent of the money obtained through the silent auction is going toward the network as well.

When asked why this event was important, Betsy explained her personal experience with the Children’s Miracle Network.

“My daughter (Kristen Perry) was a Children’s Miracle Network child. When she was six years old, she had a birth defect and had a metal bar put in her chest, and it was there for three years. And so, we’re really well aware of the program, and it’s hard. We just want to help others, and she has a passion to do it because of the experience that she went through,” Betsy said.

Kaitlyn Devore, a junior studying behavioral and health sciences, was running a booth meant to encourage students to join the ambassador team for next semester.

The team meets to talk about different ways of raising money for Vanderbilt Children’s Hospital and to try to incorporate different events in doing so.

“It helps with the hospital, it helps raise money and it’s for a really good cause. And it’s really fun too,” Devore said.

She explained that her family was also in and out of the hospital due to her sister suffering from Crone’s disease, and that it means a lot for her to be able to help out at the event.

Tori Inman, a freshman studying business at MTSU, owns Southern Hope Boutique, a clothing store ran exclusively through Facebook, and set up a booth at the event in an effort to help Raiderthon’s cause.

“I’m here because a portion of my proceeds are going to go to Raiderthon to help with the Children’s Miracle Network Hospital, and I’m very excited about that. I’ve actually worked with them in the past, so it’s very close to my heart,” Inman said.

Inman described seeing these children going through their battles with these different diseases, and how their positive outlooks are something that really speaks to her.

There were several other booths for donations, games and even a bounce house set up for the kids to play in and have fun. 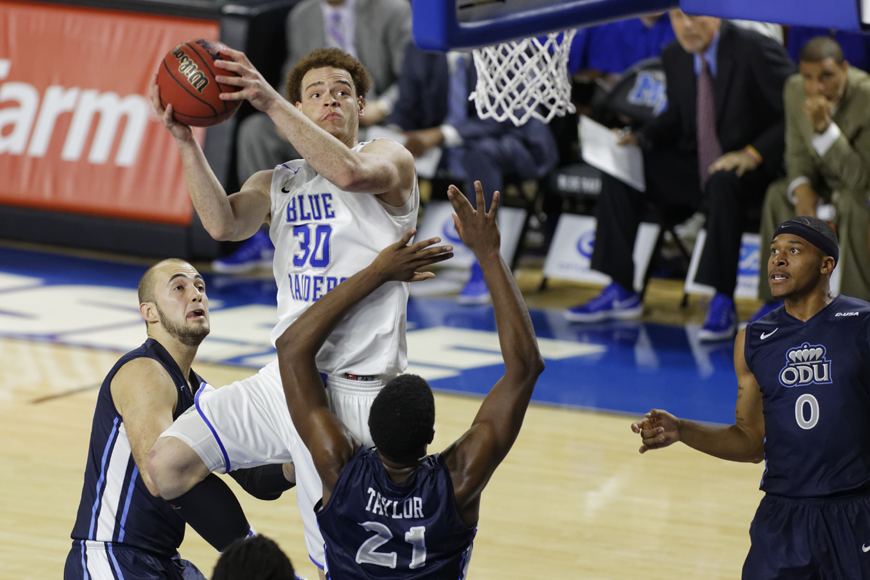