The Murfreesboro Center for the Arts brings the October terrors with its presentation of the musical adaptation of “Carrie,” one of Stephen King’s best-selling novels.

“Carrie: The Musical” focuses on a young girl who struggles with being bullied at her high school, religious persecution from her mother and finding out she has telekinetic powers. The play was rated R for mature content.

“I was definitely one of those kids who was bullied growing up, so I sympathize with Carrie a great deal,” said Director Matthew Hayes Hunter. “Yes, we show the bullying, yes, we show the name-calling, yes, we show the struggle that everyone goes through that hide(s) from everyone. Why? Because it’s real. It’s happening, and it’s something that needs to be brought to light.”

At the beginning of the play, it is obvious that the one target everyone has in common is Carrie. The aura of hatred, loneliness and terror circulates throughout the performance. The cast portrays the feeling of high school’s social injustice through judgment and verbal abuse toward their classmate.

The generic teen angst songs performed in the play work phenomenally well with the plot and mood of the play.  The entire cast performs multiple musical numbers throughout the performance, heightening the emotional trauma. Specifically, Cassie Donegan, the actress who plays the titular protagonist, portrays her character’s emotions strongly.

“Cassie Donegan makes her CFTA (Center for the Arts) debut as Carrie White, and her stage presence, not to mention her voice, will blow you away,” Hunter said.

The lighting and sound create a perfect ambiance throughout the duration of the play. Many scenes only have one red light draped across the stage to magnify the terrifying mood on stage. The horrific crimson lights combine with the suffering teenage screams to create a perfect visual from the “Carrie” movie and put it on a stage.

“Another fun element to this show is that it’s a little more immersive than some,” Hunter said. “Lots of times, when you see a show, the action is solely onstage. We are breaking that rule a little bit. When you enter the theatre, you will be at prom. You will be able to take prom photos at a photo booth, vote for prom king and queen, and the action will be happening all around you.”

“Carrie: The Musical” runs October 6-22 at the Center for the Arts located at 110 W College St.

Next Fall foliage: Science professors weigh in on understanding the changing of the leaves

“I Am Not Okay With This” is just…okay

Center for the Arts brings ‘Carrie the Musical’ to Murfreesboro

‘The Dark Tower’ overflows with action 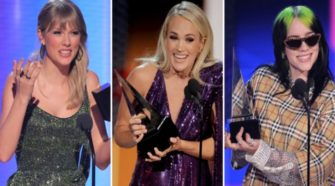 American Music Awards brings the house down with performances, drama, and nostalgia