Rock ‘n’ roll isn’t dead; it was just dormant for a while. There has been an increasing number of musical artists attempting to bring classic rock back into the spotlight of modern music. Rock bands like Arctic Monkeys, The Black Keys and Greta Van Fleet have been at the forefront of incorporating classic sounds into the modern rock ‘n’ roll genre, but there is another emerging band that might be just what every classic-rock junkie has been looking for.

The Nashville-based rock trio, Daylight Sinners, is taking Music City by storm and has no intentions of slowing down. They released their debut single, titled “Seven Seas,” Wednesday before their show at the Mercy Lounge that night.

“Mercy Lounge was instantly a venue I knew I wanted to play at when I first moved to Nashville,” said Liam Kelley, the guitarist, songwriter and creator of Daylight Sinners. “And now tomorrow I’m playing a show (there), and that’s pretty surreal.”

Kelley believes that making an impact on the music scene in Nashville will help the Daylight Sinners accomplish more of their goals and will ultimately lay the foundation for his vision for the band.

“I really just want to make an impact on the scene,” he said. “I don’t care about success, money or playing big stadiums, but I want people to understand that the Daylight Sinners are a new thing. We’ve got a unique sound that we’re bringing to the scene, and I want people to respect it.”

The three-piece rock ‘n’ roll group consists of Kelley, the guitar player and lead vocalist, bassist Scott Chapman and drummer Dustin Mckee. Incorporating heavy but catchy riffs, improvised instrumental breaks and plenty of raunchy guitar solos, the average listener might be quick to assume that the three rockers have been playing together for years, but that isn’t the case. The current three members have only been playing together for almost a year.

Kelley created the band back in Chicago with a few of his friends. They wrote original material and played shows, but when Kelley decided he was going to move to Nashville to pursue a serious career as a musician, the band parted ways. Without hostility, the other members decided to leave Daylight Sinners, and Kelley made his way to Nashville in search of new members for his already established project.

“I moved here for (my band) No Name Blues, and I heard that if you go out to these blues jams, it’s a great way to meet connections and get better shows,” McKee said. “And when we went out there, I saw this dude with this crazy curly hair, a white shirt on and he had a cool guitar. I saw him from across the room, and I just felt this crazy vibe, like, ‘I wanna be friends with that guy. I feel like I’d have a lot in common with him, and I feel like we’d play very similar music.’”

Shortly after Mckee joined Daylight Sinners, it didn’t take long before they met Chapman, who also has his own band by the name of The Garden of Eden. Chapman and Mckee both decided to join Daylight Sinners despite having their own bands due to the passion and vision they see Kelley has.

“We are the rock ‘n’ roll revolution, and Daylight Sinners is a part of it,” Mckee said. “History likes to repeat itself in cycles sometimes, and a lot of the things that used to be cool that are considered vintage often come back. And, that’s what we are.”

Whether it’s the their vintage vibe, groovy riffs or just their musical chemistry and talent, the Daylight Sinners are treating their single release and show at Mercy Lounge as the first of many groundbreaking shows at the start of their career.

Their newly released single “Seven Seas” can be found on all major platforms. Fans can visit their official band website at www.daylightsinners.com. 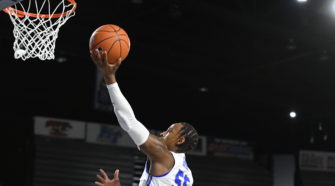