MANCHESTER, Tenn. — The special guests just kept on coming on day Day 3 of Bonnaroo, with indie star Bon Iver’s late-night set attracting a host of other artists on a day where younger artists drew big crowds throughout the grounds.

Bon Iver provided a post-midnight set chock-full of surprises and spectacle at Which Stage to help conclude Day 3 of Bonnaroo 2018 Saturday.

Vernon opened with a powerful a capella rendition of his song “Heavenly Father,” which employed chest thumping and multiple voices. He then surprised the audience by bringing out Francis Farewell Starlite of pop project Francis and the Lights to perform a few songs.

Starlite and Vernon have collaborated many times in the past, including when Starlite, Vernon and Kanye West filmed a music video for Starlite’s song “Friends” together.

Vernon then moved into various songs from his Bon Iver project, utilizing colorful and quick lighting to add to the spectacle. Vernon also employed a kind of synthesizer known as “The Messina,” which he introduced on Bon Iver’s third album, “22, A Million.” The technology allows Vernon to harmonize with himself in real-time and produce a melody of strange, surreal sounds.

Throughout the set, interpretive dancers performed alongside Bon Iver. All of the dancers donned white T-shirts with the word “People” written on them.

Vernon then brought out yet another guest when rapper Naeem Juwan, better known as Spank Rock, joined the set to perform a few songs.

Next on Bon Iver’s apparent guest list was Aalayah Eastmond, a survivor of the infamous mass shooting at Marjory Stoneman Douglas High School in Parkland, Florida. Eastmond spoke at the March For Our Lives event in Washington, D.C. in March.

“The only reason I am alive today is because I hid under my murdered classmate’s body to survive,” Eastmond told the Bonnaroo crowd. “Please vote in November, because the youth vote is powerful.’

To wrap up the unwieldy and unpredictable show, Starlite returned to the stage to perform a rendition of “Friends.” Vernon and Starlite danced side-by-side, performing the choreography featured in the popular “Friends” music video.

You say you want a Rebelution? Think reggae and rock

The California-based band enthralled the late night crowd with their unique spin on the genre. Unlike the typical form of Caribbean-based reggae, the members of Rebelution combined a rock ’n’ roll sound with brass and woodwind instruments. This twist made for an energetic crowd that cheered with every soloing horn and guitar.

The group performed their song “Inhale Exhale” off the album “Falling Into Place,” which was nominated for best reggae album for the 2017 Grammy Awards. The band also played songs off their album “Live at Red Rocks,” including: “Roots Reggae Music,” “Feeling Alright,” and “Bright Side Of Life.” The California natives also showcased their song “City Life” that is scheduled to be released Friday on their new album. “Free Rein.”

Throughout the set, lead singer Eric Rachmany seemed mesmerized by the crowd’s ability to sing his lyrics verbatim, and at times would call for the audience to sing verses. Nothing compared to how rowdy the crowd got, however, when trumpet player Zach Meyerowitz and saxophonist player Eric Hirschhorn wailed on their horns.

First Aid Kit, which consists of sisters Klara and Johanna Söderberg, were accompanied by their live-performance band members, including Scott Simpson on drums, Melvin Duffy on pedal steel guitar and Steve Moore on keyboard. The band opened with “Rebel Heart,” the opening track off its 2018 album “Ruins.”

The dream-like melodies of “Rebel Heart” carried the emotions created by the song straight to the audience, which responded with swaying and clapping. First Aid Kit moved into several more songs from their four albums before Klara announced to the crowd, “We came all the way from Stockholm, Sweden, to be here today. It was well worth it.”

She then introduced one of the duo’s most well-known songs, “King Of The World,” by shouting, “Now for more harmonies and headbanging.”

First Aid Kit’s smooth and catchy rendition of the song allowed audience members to swing and dance alongside the band.

In the latter portion of the show, the band introduced its recently released single, “You Are The Problem Here,” which deals with issues of sexual assault in current society. The song was written amid movements such as #MeToo and was described by First Aid

Kit as “written out of pure frustration and anger.”

Klara told the audience to rebuke the sexist jokes that others may let slide.

“That’s not (expletive) funny,” she said.

Sylvan Esso packs ‘em in at That Tent

Sylvan Esso, the two-piece group of Amelia Meath and Nick Sanborn, drew one of That Tent’s largest crowds of the Bonnaroo Festival weekend on Saturday afternoon, treating listeners to a set of energetic electro-pop tunes. 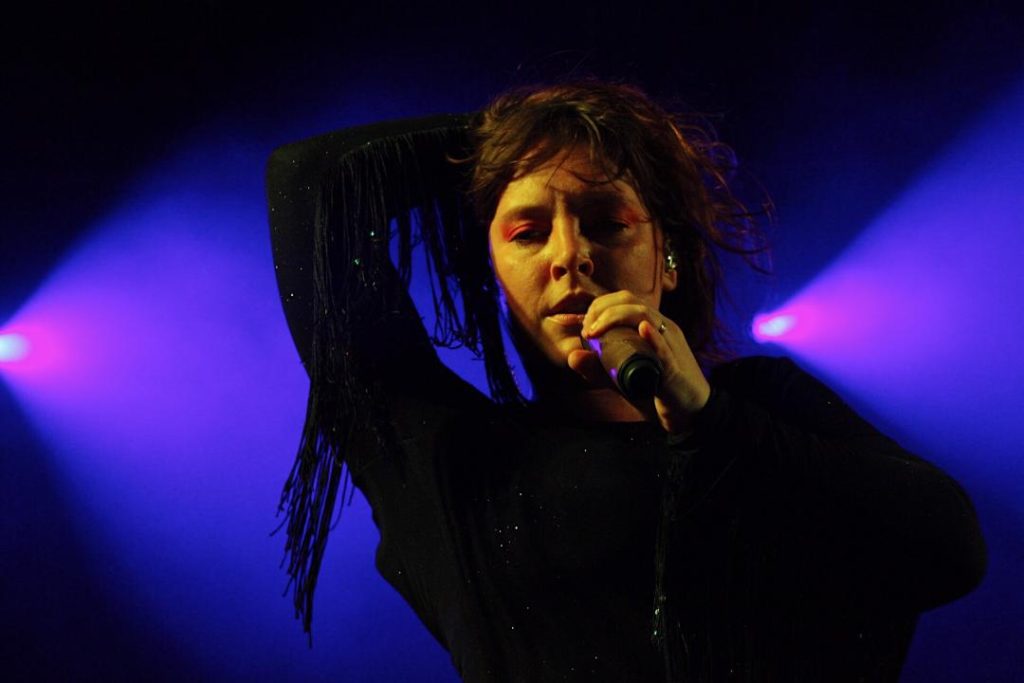 The group’s stage setup was minimal — a mixing station for Nick and a mic for Amelia — but Sylvan Esso managed to display an eclectic set of glitchy tunes intermingled with Amelia’s captivating vocals.

Though only two occupied the stage, their sound — laden with deep, pulsating basslines and looped vocal melodies — felt tremendous.

The Durham, North Carolina.-based duo each held their own distinct stage presence as well. While Nick occupied his side of the stage with antics similar to a DJ, Amelia — clad in a one-piece jumpsuit—grooved across her side with energetic leg kicks and interpretive dances.

Their set was composed of a number of hits from their two records, including “Die Young,” “Coffee” and “Hey Mami.” Each song opened with a minimal atmosphere that eventually evolved into full-blown electronic euphoria, causing the crowd to dance along and holler despite the day’s tiring heat.

Amelia’s voice also followed the energetic ebb and flow of the music, moving from reserved mumbled verses to triumphant hooks accented by the tent-rattling sub-bass entrances.

As Sylvan Esso finished their dance-y set with their hit single, “Radio,” Amelia began to express gratitude for their opportunity to play ‘Roo. But, seeing the immense crowd glued to their music, she switched her tone to one of confidence for future performances.

She simply left off with, “We’ll see you next year.”

No Regrettes — the show must go on

Weary vocal chords ignored, California garage punk band The Regrettes proved the age-old entertainment adage that the show must go on at the Who Stage Saturday afternoon at Bonnaroo.

The band hit the stage with a bang, launching into its first fast-paced song without hesitation.

Lead vocalist Lydia Night, sporting pink hair and a pink guitar, belted out the tune even though she reputedly was supposed to be on the vocal rest.

The Regrettes did concede by abbreviating its scheduled 45-minute set by about 20 minutes. Night encouraged the crowd to dance and sing along during most of their set to make up for her lack of voice.

Their wistful, nostalgic sound harkens to the girl groups of the ’50s and ‘60s, with songwriting meant to empower women.

True to that, the band ended their short set with the song “You Won’t Do” off their 2017 album “Feel Your Feelings Fool!”

Larkin Poe, which is fronted by sisters Rebecca and Megan Lovell, displayed strong country roots and a love of blues, soul and rock during their set.

After playing a few songs from their most recent album “Peach,” Larkin Poe dedicated a rendition of Ram Jam’s late-‘70s hit version of the Lead Belly classic “Black Betty” to their father, who would often play the song when the sisters were little.

Rebecca Lovell then took the time to shout out her family members, who were in attendance. The band’s cover of “Black Betty” did justice to the rockin’ vibes of the Ram Jam version, along with Larkin Poe adding its own flair to the track.

The sisters continued the streak of song dedications by playing “Preachin’ Blues,” a song from “Peach,” in honor of American blues singer Son House. Larkin Poe tapped deep into the bluesy portion of their repertoire to produce the song on stage, leading the crowd to jive and bob their heads to the music.

Near the end of the show, the sisters introduced their song, “Blue Ridge Mountain Memories,” which details the experience of living the country life. Rebecca Lovell announced that herself and her sister were born in Knoxville and raised in Georgia.

“We just wanted to write about what it’s like to come home,” Rebecca Lovell said to the crowd.

Previous The story of Cage the Elephant’s secret Bonnaroo set