Birmingham, Alabama, hosted the fourth annual Sloss Music and Arts Festival this past weekend. Despite rain and lightning-related delays and cancellations, thousands of music fans came out to the old Sloss furnaces to watch some of their favorite artists perform. Sidelines was there to catch some of the most talked-about shows. 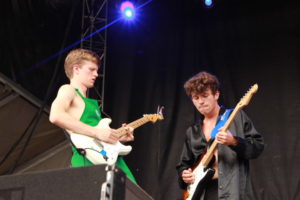 Nashville-based band Arlie opened the Steam stage Saturday afternoon with big smiles and a groovy performance of “Didya Think,” one of their most popular tracks on SoundCloud. The festival’s second-largest stage was a big step up from the group’s gig at the Kirkwood House in Murfreesboro earlier this year. They’ve grown a great deal in the past months, scoring slots at Sloss, Forecastle and Bonnaroo, and for good reason. Even though they haven’t yet released an EP, Arlie has a small catalog of infectious songs online in the alternative-pop/rock genre, carried by Nate Bank’s distinctive voice. Although the musical performance was very well-done, the most memorable component of their set was easily the energy. Each member seemed so genuinely happy to be there. At times they were close friends having fun on stage. The audience just happened to be there. Toward the end of their performance, Bank revealed that he wasn’t sure he was going to be able to play that day because he was in a car accident the day before. He thanked the crowd for their energy, saying the experience had made him feel better. Arlie’s set delivered a bright, catchy, energy-packed performance with all the charm you would expect from a group of Vandy and Belmont boys. 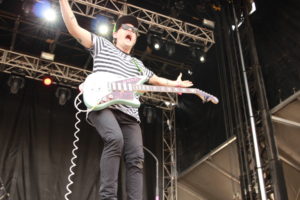 *Repeat repeat flooded the Steam stage with strong, fast-paced surf rock and a healthy measure of humor. After their first song, guitarist and vocalist Jared Corder announced, “Hello, we’re LANY,” to a crowd that was heavily populated with notoriously intense fans who were waiting for the next act. The band is made up of husband-and-wife duo Jared and Kristyn Corder, both transplants to Nashville, whose onstage personas created a well-balanced chemistry between Jared’s chaotic energy and Kristyn’s chilled-out vibe. Midway through their set, they covered The Dandy Warhols’ “Bohemian Like You.” The cover was followed by their original “Everybody’s Falling in Love,” dominated by a strong rhythm and a quality that makes it hard not to sing along. Their set was characterized by a feeling of letting go and cutting loose, which was only intensified when Jared confided that they had been through a lot of ups and downs last week. He encouraged the audience to stay present for the show. The band stated to the crowd that if they’d had a rough week, to let it go, and if it had gone well, they had no excuses. Unfortunately, about half an hour into their set, Sloss cut them short due to lightning in the area that would end up shutting down the festival for three hours. As disappointing as it was to not see their whole performance, it’s just another reason to catch them again. Look ahead for Sidelines’ interview with *repeat repeat from Sloss to read about their journey as a band and advice for other musicians. 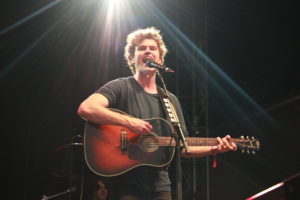 After a wet and frustrating delay, Vance Joy was just what the doctor ordered to raise spirits at the furnaces. He opened with his hit “Fire and the Flood,” carried by strong melody and lending itself toward his impressive ability to belt. He had a plain look with a dark T-shirt and black jeans but a voice that compels you to watch. Although Vance Joy is a singer-songwriter, his sound, both on stage and on record, is rich with its depth of sound. His performance on the Steam stage included a beautiful horns section that perfectly complemented his vocals. His set took an unexpected turn when he did a mashup cover of “All Night Long” by Lionel Richie and “Sorry” by Justin Bieber, confirming his talent for creating pop arrangements. He closed out his set with a couple of songs played on ukulele including “Saturday Sun,” a song that he said is about “meeting somebody great and hoping that when you get back to see them the spark is still there.” He finished with “Riptide” from his 2014 album “Dream Your Life Away.” His performance wasn’t elaborate, but it was so enthusiastically and joyously executed that you don’t want anything more. Anything more would be too much. His show was a beam of light at sunset after a rainy, tumultuous day.

Jason Isbell and the 400 Unit 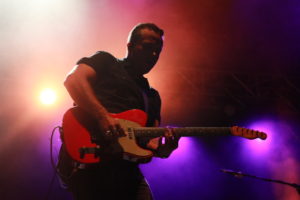 Jason Isbell and the 400 Unit took the Steam stage Saturday night with heavy-hitting, full-band Americana rock — and it was loud. The group’s music is grounded in place and characterized by twang, toughness and a southern man’s gentle touch. Isbell and a portion of the band are from Alabama, and they played Sloss with the vulnerability of a hometown show. “Alabama Pines” was a love letter to home while the political and poignant lyrics of “White Man’s World” struggled with concepts of privilege and inaction. Filled with rich harmony and a good measure of jammy guitar licks, Isbell’s music was a celebration and an honest look at the place that he and many others call home. The show came to an emotional head when Isbell played “Cover Me Up,” which he dedicated to his wife, Amanda. The song was stripped down to just him and his guitar until the final verse when the band joined in to fill the festival with the love song of someone who wants to be better. The set ended with “Little White Church” which included an intense onstage jam with the 400 Unit and Isbell’s biggest hit, “If We Were Vampires.” The hour-long set was an emotional, authentic and deeply rooted performance and one that won’t soon be forgotten. 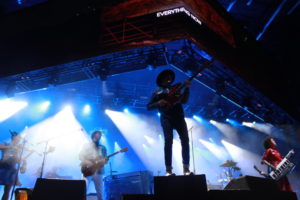 Six-piece Canadian rock band Arcade Fire put on an energetic and, at times, anarchic show at the Blast stage on Saturday night. Touring their sixth studio album, “Everything Now,” they boast a wide range of sounds and a hyperactive onstage dynamic that can make you dizzy. The strength of the group is not only in their number but in their versatility, especially in the case of Régine Chassagne. The singer, in the course of a few songs, played keys, percussion and accordion in addition to singing. The band has obvious pop influences, but its layer of sound and the way it stretches genre helps it avoid pop’s cardinal sin: predictability. In the middle of the set, bassist and lead singer Win Butler stopped to make a statement. He told the crowd of thousands that his bandmate and wife Régine’s father was a refugee from Haiti. “People are just coming here for a better life,” Butler said, commenting on American refugee policies. Later in the show, Régine radiated star-power, singing “Sprawl II” in a bright red leather jumpsuit and dancing to the ’80s synth-inspired song. In their headlining set, they played favorites from previous albums including “Reflektor” and “The Suburbs” The band closed the night with “Wake Up” from their 2004 debut album. The crowd sang out the soft “oh’s” of the chorus until all the instruments had dropped out. It was just their voices and the band’s. 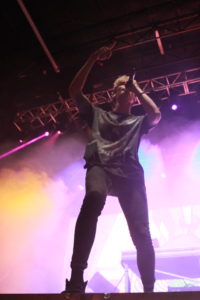 Griz’s Sunday night set on the Steam stage was easily one of the most distinct of the weekend. The 28-year-old artist uses a mixture of organic sounds from an on-stage bassist and his own saxophone and EDM tracking and techniques to come up with something truly interesting, jazzy and danceable. His setup included the instruments but principally featured a table with two laptops. In truth, the physical presentation was not visually interesting, but it didn’t matter — the graphics, the lights and most importantly the music were. Griz’s set was experimental yet accessible. If the insane graphics and larger-than-life sound pumping out the speakers wasn’t enough to draw a crowd, he sampled several instantly recognizable pop, hip-hop and R&B songs, inciting an hour-and-fifteen-minute long dance party in the middle of a field. Among the attendees were LED-light hula hoopers, a man in an Elvis-style American-flag jumpsuit with a matching fanny pack and countless people that probably had “good vibes only” bumper stickers. For one moment during the show, Griz and his bassist both came out from behind the table and onto the front of the stage. They passed a riff back and forth, improvising and showing off their musical chops. It may have been the only stripped-down moment of the show, but it still felt full. Toward the end of his set, he played “God’s Plan” by Drake, adding an unexpected breakdown with a light show that was both an epileptic nightmare and a hallucinogenic dream. The crowd roared. He bid them goodbye saying, “Take care of each other. We’ll see you guys soon.” And thus, they left the sweatiest show of Sloss Fest.

After another day of rain and scheduling snafus, Chris Stapleton eased the audience at Sloss with an hour-and-a-half set of country and western music that appealed even to those who might not usually enjoy the genre. His songs have the soul and rugged toughness that’s missing from much of today’s commercialized and pop-influenced country. Still, he manages to sidestep country-music tropes and cliches while evoking similar themes. Stapleton appeared on stage as rough around the edges as the old Sloss furnaces themselves, and his performance was equally as driven by guitar as it was by his iconic, raspy voice. He paced the performance with songs on the front end like “Millionaire,” making the whole show a slow burn.  Midway through, he played “Broken Halos” that lifted the energy of the crowd and led into a raucous, soulful performance of “Second One to Know” in which he showed off his impressive vocals and had a notably heavy jam session. A short cover of “Freebird” by Lynyrd Skynyrd drove the crowd wild with glee and led into Stapleton’s own “Devil Named Music.” He played fan-favorite “Parachute,” followed closely by “Tennessee Whisky” to close out the festival, but instead of going straight to the on-script lyrics, he introduced his band of 20 years in some improvised verses, making the crowd wait seven long minutes before the chorus. But when it finally came at the end of the sultry southern night, it seemed every person in the crowd could sing along.