Priya Patel, the vice president, said, “This is our first big event, but we’ve done small outings, the haunted house and stuff like that. This is the first time we’ve had to book a room and order food.”

The organization has been active since August. Patel said the moral of the Diwali story is that good always wins over evil.

“… It’s considered our new year for the Indian calendar, so this is like a fresh start,” Patel said.

The story of Diwali involves a warrior prince named Rama and a demon named Ravana, who had twenty arms and ten heads. Ravana kidnapped Rama’s wife, which lead Rama on a long search to find her. He received help from a monkey king named Hanuman. When Rama finally found his wife on an island, an army of monkeys and bears fought against Ravana. Rama managed to kill Ravana with a magic arrow. Rama and his wife then began their long journey back to their land, and everybody lit oil lamps to guide them on their way and welcome them back. Hindus interpret the story of Diwali based on where they live, while other non-Hindu communities have other reasons for celebrating the festival.

The organization’s main goal is for everyone to know that they’re on campus, they’re active and for other students to become more involved in their activities. The event included the introduction of the officers, information on what the festival is about, dinner and ended with dancing.

Jenshi Patel, the secretary of the Indian Cultural Exchange, said, “Our temple holds an annual function where it’s kind of the same. People come, dress up in their finest clothes, socialize, eat good food, dance and just celebrate the new year.”

Kylie Curtis, a biochemistry student at MTSU, said, “I recognized the story about Rama, but I didn’t know the full history about Rama and the demon. So, that was cool to learn about.”

Janard Curtis, an MTSU alumnus at the event, said, “I always see different friends and people of different cultures celebrating out, so I texted my Indian friend (that) whenever the Indian community does something (to) please let me know.”

Curtis didn’t know what to expect before showing up to the event but said he learned a lot and met many new people.

“… The orange meat and the fried vegetable appetizers that were spicy were all really good,” Curtis said.

The appetizers were pakoras, which are crispy chickpea-battered vegetable fritters. Dinner consisted of a homemade cheese cooked in curry called paneer tikka masala, chickpeas cooked in curry called chole chana, bread of super-fine flour called butter naan and white rice. For dessert, they had a cashew, milk and sugar sweet called kaju katli. All the food they ordered was from local Indian restaurants in Murfreesboro.

This was one of the first big events that I.C.E. has hosted, which brought in a large body of Indian and non-Indian students together. The organization was able to inform the audience on what Diwali means as well as share their culture’s food, music and traditional clothing.

Previous Review: ‘The Ballad of Buster Scruggs’ sings, shrugs, slaughters its way to the top 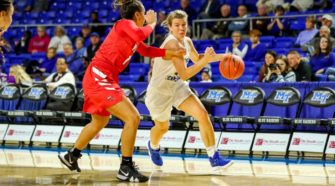