Over two weeks after the 2018 midterm elections, Americans are still reeling over the monumental changes brought to Congress. With an estimated 113 million voters casting their ballots, the turnout rate marked the first midterm election in U.S. history to exceed 100 million votes, according to a CBS News report.

Voter turnout was not the only thing to make history, however. From a Somali refugee to a pair of Native American women, the 2018 midterm elections marked a day of historic achievement for women and a number of minority communities. Particular attention has been given to the women elected to office, earning the election year title, “the year of women.”

Online communities and political activist groups alike have been celebrating such a diverse election, with one obvious exception: a rather pointed and unabashed dislike of the newly-elected Senator Marsha Blackburn. Images like the one below have been shared widely on social media, supporting the historic firsts for women while discounting those of Blackburn’s. The reason? Blackburn’s purported history of ignoring women’s issues, and in some cases, even contributing to the them. 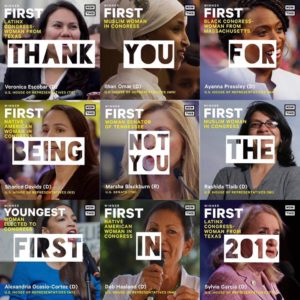 In a viral Instagram post that seemed to lead the charge against Blackburn even before Election Day, pop star Taylor Swift expressed her dislike of the then-representative, stating that, although she would like to continue voting for women, she “cannot support Marsha Blackburn.”

“I cannot vote for someone who will not be willing to fight for dignity for ALL Americans, not matter their skin color, gender or who they love,” Swift posted. “She voted against equal pay for women (and) against the Reauthorization of the Violence Against Women Act, which attempts to protect women from domestic violence, stalking, and date rape.”

Swift’s statements drew immediate ire from both supporters of Blackburn and Blackburn herself. Blackburn appeared on “Fox and Friends First” to defend herself, saying that she has a “good record” on women’s issues.

“Of course I support women and I want violence to end against women,” she said. “I have been very active in abuse shelters and in child advocacy centers, I’ve been advocating for women and equal pay since I was 19 years old and making certain that women have the opportunity for maximum pay.”

Mike Huckabee, host of the Huckabee show and former governor of Arizona, rushed to Blackburn’s support, saying that Taylor Swift  “…has every right to be political but it won’t impact election unless we allow 13 yr old girls to vote. “

So @taylorswift13 has every right to be political but it won’t impact election unless we allow 13 yr old girls to vote. Still with #MarshaBlackburn

This blatantly dismissive attitude of the sizable voter base that Swift reaches (nearly 71,000 people ages 18 to 24 registered to vote through Vote.org between the day of the post and the two following days) is exactly the kind of indicator students like Emma Fisk, an Interior Design major at MTSU, find off-putting. And in an election that focuses so heavily on young voters, off-putting is not an ideal emotion to elicit.

“In my personal research…I cannot agree that Blackburn belongs in the same category as Alexandria Ocasio-Cortez and Ilhan Omar,” Fisk said, referencing both the youngest woman and one of the first Muslim women ever elected to Congress. “The policies that Marsha Blackburn has supported, and not supported, lead me to believe that she does not fight for women’s issues or the interests of minorities.”

The issue of Blackburn’s vote in cases such as the Lilly Ledbetter Fair Pay Act of 2009 and the Reauthorization of the Violence Against Women Act struck a note with Fisk.

“By voting against equal pay for women and the Violence Against Women Act, I learned very quickly where her priorities were,” Fisk said. “In this way, I fail to see how Marsha Blackburn’s … gender alone would constitute for a celebration.”

These two issues, among others, seem to be key points of contention for Blackburn’s female voter base. In an interview with MSNBC, Blackburn stated she voted “no” on the Violence Against Women Act, a law that provided money to investigate and prosecute crimes against women and supported victim counseling, because it “was expanded to include other different groups” like LGBT, Native Americans and undocumented victims of domestic violence.

“When you start to make this about other things, it becomes an ‘against violence act,’ and not a targeted focus act … I didn’t like the way it was expanded to include other different groups,” Blackburn said. “What you need is something that is focused specifically to help the shelters and to help out law enforcement, who is trying to work with the crimes that have been committed against women and helping them to stand up.”

Blackburn did vote yes on a portion of the bill – the portion that the House Republicans proposed that omitted sexual orientation and gender protections. The GOP version was opposed by several groups, including the American Bar Association, and failed by a vote of 166 to 257. The Senate version, the one that was accepted into law, was the portion Blackburn voted no on.

The second prominent issue for female voters, Blackburn’s vote against the Lilly Ledbetter Fair Pay Act of 2009, which reinforced laws preventing unequal compensation based on sex, is what many critics cite as very definitive proof of Blackburn’s unwillingness to support women. Blackburn stated during a roundtable on NBC’s Meet the Press that she opposed equal pay laws because women “don’t want the decisions made in Washington. They want to be able to have the power and the control and the ability to make those decisions for themselves.”

Supporters say that Blackburn has ardently defended the idea of equal pay, however. It’s just not in the way many women want.

“You know, I’ve always said that I didn’t want to be given a job because I was a female. I wanted it because I was the most well-qualified for the job,”  Blackburn stated in 2013. “And making certain that companies are going to move forward in that vein, that is what women want.”

“What women want” has been a popular political adage over recent years, and the controversy surrounding such issues has not gone unnoticed by other MTSU students. One female student, who is involved in multiple student organizations and wishes to remain anonymous, believes the conflict between Blackburn and women is misattributed.

“I think arguing that Marsha Blackburn does not represent women’s issues is putting all women in one box and assuming all women believe the same thing,” she said. “Many people have pointed out her lack of support of several bills. They take these issues and frame them in a way that makes it appear Blackburn is against equal pay, against support for women, when her issues with these bills appear to stem from issues she has with the legislature itself, not with the causes they represent.”

The student stated that, although the initial reaction of Blackburn’s troubling “no” votes may lead one to believe that Blackburn doesn’t support women’s rights, many of these decisions are based on supporting women.

“I’m not very political at all, and I think so many social issues need to be resolved by other means than legislature,” she said. “I think all politicians are human and none of them are perfect. But for the most part, I think I like Blackburn and the things she stands for – to the best of my limited knowledge – and I think she is a big step for women. There are so many sides to women’s issues that claiming that she isn’t supporting them is putting them into one small box, when it’s a lot more complex than that.”

“Complex” is likely the most fitting word to title Blackburn’s relationship with women’s issues, and it is only bound to become more complex. Whatever comes of this election, Blackburn will have to work harder to earn the trust of the female voter base if she doesn’t want the next landslide voter turnout to sweep her under its wave of change.