Music lovers from across the country visited Music City for the 20th annual Americana Festival. The six-day event adds a twist to traditional festivals. With over 50 music venues across Nashville’s Metro area, there is never a dull moment. From Sept. 10 through Sept. 15th, fans attended showcases, panels, daytime conference activities and performances. The Bluebird Café, War Memorial Auditorium, the Ryman Auditorium and Cannery Row are some of many places where fans could see their favorite artists perform. The underrated Americana genre has a creative fusion of country, gospel, bluegrass, rock and blues. Musicians Corner hosted the Americana Fest at Centennial Park late Thursday afternoon. The venue provided a family-friendly environment where fans enjoyed free live music without the hassle of crowded venues or limited parking. 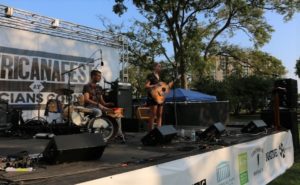 Fans set up their vibrant colored blankets and camp chairs moments before the outdoor concert began. The energy was relaxing. Dori Freeman kicked off the evening with mellow tunes of country and gospel music. Freeman sang “If I Could Make You My Own,” from her album “Letter Never Read.” Her performance was like a peaceful acoustic playlist on shuffle. Freeman said her newest album, “Every Single Star” is a message for her young daughter. Fans rocked their heads with a calm motion while sitting underneath the shady trees. Dori Freeman’s musical taste is a mixture of Appalachian and traditional folk music. At the end of the performance, Freeman thanked the crowd for coming out. 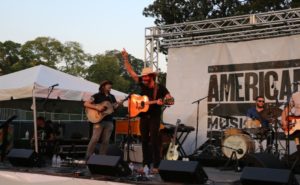 Empty spaces in the field filled up as the next band, Front Country, walked on stage. The California band made Nashville their home after performing live for the first time at Station’s Inn. Front Country began singing “If Something Breaks” from the album “Other Love Songs.” The soft melody touched the souls of the audience. The lyrics explained working through the storms of a relationship. Songs like “Reckoning” and “Come across the Water” got the audience rocking with the smooth rhythm. The band played a diverse set of instruments including the banjo, mandolin, drums, tambourine and guitar. Front Country’s music style is a melting pot of folk, country, bluegrass and pop music. 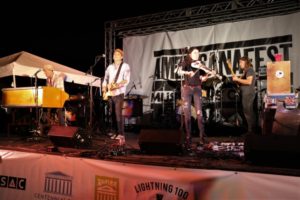 Stephen Kellogg and the Sixes

After a brief intermission, fans found their way back to their seats as the host announced the next performer. Stephen Kellogg is a singer and songwriter who wrote for 2017 American Idol winner, Nick Fradiani. Stephen Kellogg explained his newest album “Objects in the Mirror” was inspired by the journey of the American life. The band recorded the entire album in one week in Nashville. Then the performance began with a few soft rock songs. Kellogg tried to get the crowd to sing, “High Highs, Low Lows” but everyone was a little reserved at first. The engagement begins to increase as he hypes the audience by clapping with the beat to “Last Man Standing.” When Kellogg ended the performance with one last verse, he jumped off the stage to sing with the audience. Everyone chimed in, singing “It’s going to be the last man singing tonight.” The audience cheered and Kellogg told them, “Thanks for being a wonderful audience and filling up our souls with love!” 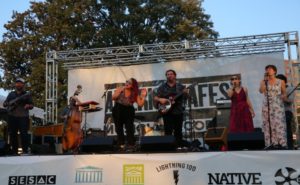 Late into the night, Donna the Buffalo stole the show with catchy upbeat tempos. The band has performed at thousands of festivals including Bonnaroo. Their music style is about self-empowerment and embracing the inner spirit. Just listening to the beat gets the listener moving. The grass-roots band plays “Forty days and Forty nights” off their new album “Dance in the Street.” The powerful sound creates a soaring echo in the distance. The crowd shimmied their way to the front stage. Each song adds a sample of upbeat funk, country, rock ‘n’ roll and bluegrass. The band continued playing songs without any introduction.

Previous Students reflect on the importance of Constitution Day

Next Rep Your Roots 2019: a communal night of powerhouse performances