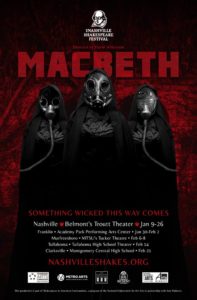 The clash of swords and a mother crying are heard as a battle rages on and a baby is dying. That’s is the entry point into the Nashville Shakespeare Festival’s current production of “Macbeth.” This version of the Scottish play is set a hundred years after the fall of modern civilization as we know it. The world is reduced to a toxic wasteland full of apocalyptic nightmares at every turn. A few rugged clans have risen up from ashes of this nuclear desert and fight brutally over any remaining resources, as not obtaining these resources results in most certain death. The secrets of guns and bombs have been lost in the destruction, and warriors use more crude weapons such as spears and swords. Following the classic storyline, the cast uses the original language, with caring revisions. David Wilkerson, the director and no stranger to the world of Shakespeare, takes us on a dark reimagining of an already tragic story, and asks us the question in a world where so much of our humanity has been stripped away, and any scraps are precious, “What does it mean in that kind of world, to still make those choices that throw away that last little thread of humanity?”

The production of this touring show was expertly crafted to enhance the vision of Wilkerson. From costumes to stage and sound design, everything sucks you into this desolate world of death and misery. When adopting this vision for the show, he came across a series of images that really struck a chord for how certain characters would be portrayed. “I saw this wonderful image of this sort of Mad Max figure with a gas mask on, and I was like oh heck yeah! That’s the witches,” said Wilkerson. He used their disturbing aura very well, having them perched around the stage ominously, watching every action of the other characters.

“I wanted them to be a physical manifestation of the evil and corruption in the land and also the evil and corruption in the character’s choices,” he elaborated. In the show the witches feed off of pollution and corruption and tempt characters like Macbeth, becoming stronger with each decision and leading to corruption and evil. Some of the most striking scenes involve the witches with their gas masks manipulating the spirits of the dead that only Macbeth can see. For instance, when Banquo makes his first appearance as a ghostly apparition at a dinner party, the witches are controlling his limp corpse with tubes and a gas mask of Banquo’s own, connecting him to the witches like a gruesome puppet. As the witches lurk in the background of most scenes, another very powerful direction was using their presence to ensure all of the murders. When it seems that a mortal character is unable to execute these horrible deeds, a witch enters the scene and grasps the dagger and assists in the final blow of each murder, with the remaining wicked sisters surrounding the freshly dead corpse like vultures and sucking some sort of glowing energy out of their lifeless bodies through tubes. The trio brings an impending sense of doom to the show overall.

Another feature of this show was the intensely crafted fight choreography. Carrie Brewer, assisted by director David Wilkerson, executed many battle scenes that carry the show’s energy right from the very beginning. “It’s such a perfect little play…the scenes tend to be short and almost cinematic, and it hits the action early. We start in a battle and the witches come in almost immediately,” described Wilkerson, with a gleeful tone at describing “Macbeth” as one of his favorite Shakespearean plays to work on.

They have each choreographed many fights in their careers, but Wilkerson said the last fight between Macduff and Macbeth is one of the best he has seen on stage. Wilkerson and Brewer not only pull off a great fight scene, but manage to balance Macbeth’s arrogant assumption that he is invincible based on what the witches told him, and his guilt that freezes him in horror as he sees the dead Lady Macbeth, played by Mariah Parris, being manipulated as all the other dead were. This moment of paralyzing fear gives Macduff the opportunity to strike his final blow, ending Macbeth’s short yet devastating reign. Parris, for this scene, was perched on top of a massive communications tower structure at the center of the whole show. It allowed her suffering to loom over not only those below, but to sweep over the audience like a blinding light from a guard tower. She takes a similar stance in the very beginning as she is weeping over the loss of what appears to be a child.

Wilkerson explained his decision to feature this in the opening scene, saying, “One of the things that is kind of a clue in the text…putting two and two together they obviously had a baby but lost it, and in this kind of world death has to be super common…but for me, I really wanted to up the stakes where they just lost the baby. It’s a fresh wound.” It adds to the despair and desire for something better than what Macbeth and especially Lady Macbeth have, which inevitably leads to their downfall.

The tower constructed of scraps from a previous world, our world, staples together the idea that we are all in a wasteland, brought about by our own lust for power. A thought not too far off from where we all could end up one day. This fixture was designed by Jim Manning and lit in a nuclear glow by lighting director Anne Willingham. There is an old rusted truck crashed into the side of the structure for added effect. The play’s mystery and unease is multiplied by otherworldly sound design done by composer Evan Wilkerson. “One of the cool things that he did, was that he looked at sounds from outer space that NASA has captured, and also sounds from the depths of the ocean,” said David, Evan’s father.

The cast only had four and a half weeks to rehearse this show. “We only get the lights, and the costumes, and the sound for the last half week…It was amazing to see how much of an influence it was on everybody…we had been creating the world for four weeks, but that really completed the whole process,” he said.

Despite the darkness in the show, there were moments of comedic relief, traditional of a Shakespeare play. Among the cast members was MTSU alum Delaney Keith, who played one of the three witches and a hysterical porter. The two characters showed a very broad range that Keith had a lot of control over. She bounced between the terrifying chanting of her post-apocalyptic witch, and the drunken aside she had as she knocked on the castle gates seemed to get louder and louder with each tension easing quip. While the latter scene was intended to stir some laughter from the audience, there was one actor who got the most laughs, that does not traditionally. That would be NSF favorite Sam Ashdown as the lead in Macbeth. Rather than playing a sullen and brooding bloody king, he picked up on a more crazed and manic path for the character’s arc. This approach may have been why the audience seemed to laugh at so many of his lines, among them when he confirms with Lennox, played by Jonathan Contreras, “It was a rough night.” He says this before the discovery of the recently slaughtered King Duncan, played by Brian Webb Russell. This at first appeared to be a mistake that could have significantly taken away from the weight of the show. Why would a tragic character deliver so many lines that provoke laughter from the audience?

It could also be seen, upon further thought, as more of an insight into other characteristics of Macbeth, exploring more of his arrogance, or his fall into insanity, brought about with his attempts at handling his psychological crisis throughout the story. Perhaps the laughter is a sign of the uncomfortable tension created by Ashdown’s portrayal of Macbeth as an unbalanced king, frighteningly willing to act on any of his paranoid thoughts. Another smaller characteristic in the show that didn’t seem to quite fit was one actor’s attempt at a Scottish accent in the last act. The accent itself wasn’t peculiar, but it stuck out in a strange way as no one else in the cast had been attempting an accent remotely similar, begging you to ask why a detail like that would be suddenly introduced.

The show featured many of Middle Tennessee’s best, both new and old, to the Nashville Shakespeare Festival company. Keith, a graduate from the MTSU theater department is a great example of how “the department of theater and dance tries to…really prepare their graduates” for the professional world. “There’s also a current student…from Belmont. Lucy Buchanan who is playing Malcolm, and she’s still just learning the ropes…and for her, she talked about how great it has been to work alongside professionals,” said Wilkerson.

Next fall, the Nashville Shakespeare Festival will be collaborating with MTSU on a production of The Merchant of Venice, further extending this professional reach into a student’s realm of possibilities here at MTSU. “They’ll be able to work with the professional actors, and get a taste of what it takes to be a pro,” explained “Macbeth’s” director.

In addition to talking about the student involvement, Wilkerson commented on the unique theater environment of Middle Tennessee that he was first exposed to after moving from New York. “It’s a really remarkably strong theater community. We’ve got a ton of really talented actors, directors, technicians, stage designers, and so it’s really a tight knit talented group of people. We’re in the process where new theater companies are being born and are growing, and really we’ve had the community of artists for a while. We are just trying to make sure there are enough jobs to go around… and that’s the thing about theater. There’s good theater and bad theater everywhere.”

This piece of the theater is definitely, in the former category. With an excellent cast and world transporting production, the Nashville Shakespeare Festival’s recent take on “Macbeth” is a must see. Wilkerson’s vision is continuing to tour throughout Middle Tennessee the rest of the month at Tullahoma high school on the 14th and Montgomery Central high school on the 21st.

Next Trailblazing journalist Wanda Lloyd speaks at MTSU about racism, sexism, and perseverance

Once On This Island: a summary of an emotional, balmy musical