MTSU student abroad: on war and conflict in Israel

Israel is a place constantly in news headlines and controversial conversations. It is also a place of complicated politics and misconceptions. 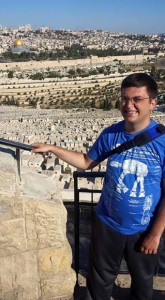 War, sectarianism and terrorism have put Israel in household conversations across the world, however, that’s not the whole story. On July 11, a group of MTSU students boarded a plane in Philadelphia en route to Tel Aviv to find the story of Israel. Each student had a different background, different major and a different reason for taking the trip, but one thing was the same — they were all looking for the truth behind the media attention.

Perhaps the first thing I noticed about Israel was how green it was. The first thing people think when they hear Middle East is desert, but Israel has trees, shrubbery and beautiful flowers. Ronny Simon, our tour guide, mentioned that agriculture is one of Israel’s largest industries. Another thing all of the students noticed was how safe we felt during our time in Israel.

Before we left we were warned by friends, family and the MTSU Study Abroad office that we were not going to a safe place, however, we never felt endangered. One moment when we were in Tiberias, another student pointed out that a man left his coffee and cell phone on a table in a street-side café without worrying they would be stolen. People were neighborly there.

However, Israel certainly does have conflict. Ronny Simon took us up to a war memorial of the 1967 War overlooking the Syrian border near Golan Heights. Today, there are land mines scattered across the area past the fence on the Israeli side. Sometimes we could hear faint muffled sounds or see smoke in the distance. This is common life for the Syrian people on the other side.

It was heartbreaking to think that just over the fence, people are struggling to survive, and we don’t even know where to begin to help them. Perhaps this is a huge part of the truth about the region. The whole land is in constant conflict and there are no cookie cutter answers. War is never simple.

Recently, someone made the comment to me that “in the past war was simple — people stood on opposite sides and ran at each other.” While that is true, I don’t believe that even back then it was that simple. War has always been the biggest tragedy of humankind, and today it has become even more complicated. It is hard to see whose side anyone is on. Technology and the media complicate war even more, because it provides everyone with a platform to share their agenda. People are terrified, but don’t know what to do because the world woke up and bad guysdon’t always wear masks anymore.

This is the world Israel has been smack dab in the middle of for thousands of years. Like Ronny told us, this piece of land is small and has always been caught between powerful empires and their conflicts, yet the god the Jews believe in told them this was their land. So, since the beginning the Jewish people have been caught between major world conflicts and, by being in the middle, it seems the world constantly wants to kill them. It is still the same for them today.

What I learned is that although the Israeli conflict is far from complicated and there have been crimes committed on both sides, the most important thing is to take into account both perspectives. No matter what a person’s point of view, to discount the other side is to dehumanize a group of people.

It is true the Palestinians were living on the land for 100 years, but so were Jews. There were acres of purchased land for Jewish people in the area to build on and make their homes. This is where the Jews were coming during the time of World War II, and after the war the UN declared Israel a state and the borders were expanded and the Jews had their homeland back.

These are facts, however, there are many conflicts between the two groups on land, religious sites and borders, and Israel gets a lot of press for being an oppressive state. To understand why Israel is the way it is, Ronny took us to three sites: Masada, the Temple Mount and the Jerusalem Holocaust Museum. Each told a different story of Jewish history and each gave us a different idea of why Israel takes no threat lightly and why they are there today.

Masada tells the story of a group of Jewish zealots who lived in this fortress for two years after Jerusalem fell to Rome. One night, Rome finally stormed the fortress and the men knew they were going to die. Rather than be slaves of Rome, they slew their women and children, drew lights to slay each other and the last man fell on his sword, because the Jewish religion forbids suicide. However gruesome this story is, it tells of the Jewish resilience to fight oppression and resist ever being in bondage again.

The Temple Mount is the highest point in Jerusalem and the most important religious site for Jews, Christians and Muslims. It is the place at which both Jewish temples were built and destroyed, and houses the third holiest Muslim site: the Dome of the Rock, where they believe Abraham was to sacrifice his son and God spared him, and the Al Asqa Mosque. This is what much of the fighting is over in Jerusalem today. I remember walking down to the Wailing Wall and praying with the Jews. Afterward, I stood next to a student and with tears in his eyes he said to me, “This is all they want to do,” referring to the praying Jews.

It is very moving, because today the Jews have to be escorted up to the site of the Temple Mount, which is controlled by Muslims. While we were up there some Jews were waiting to visit, but a group of Muslims came and screamed at them, spitting and throwing rocks. Needless to say, the class was shocked, but Ronny said this is common. This is not to paint a bad picture of Muslims, I met a lot of pleasant Muslims, Jews, Christians and Armenians in the Holy City.

However, I hope to discredit reports that say the Muslims are the ones oppressed when Jews can’t even go to their holy site safely and Christians are fleeing the country by the thousands because of oppression in their Muslim dominated communities. The third site we visited was the Holocaust Museum. This was understandably the most moving of all the sites we visited and told the final story of why the Jews were there. I don’t have room to tell my whole story here. I only want to try to convey what I know to be true. I detest crimes against humanity and I hate war and conflict. I am neither against the Jews or Palestinians, I am in favor of peace in the region. I pray the two groups can learn to live together, pray together and learn together — the same prayer I pray for the rest of the world.