Middle Tennessee Track and Field has been nothing short of spectacular this season. The team has routinely set personal and school records across the board throughout the season. Earlier this week, two athletes were recognized as Conference USA Indoor Track and Field Athlete of the Week. Multiple athletes on this year’s team ranked high in the conference and in the nation. The athletes are all over the field, ranging from the long jump to the distance runners.

Coach Dean Hayes has been coaching at Middle Tennessee for over 50 years. He has done a remarkable job leading the team this season, but admits that there are also a couple of upperclassmen that are helping guide this team.

“Eliud Rutto is a senior. He’s played ever since he’s been a freshman. (The team) looks up to him because he’s a little older. He’s been through the program and has leadership qualities from his time in the Army,” Coach Hayes said. “Janet (Amponsah) is also a big help. She’s also been around the program for years and the players look up to her too.”

Coach Hayes was quick to point to the talented athletes who have helped the team enjoy so much success this season.

“We have quite a few athletes ranked in the top 25 in the nation. When you have so many, they get confident,” Coach Hayes said. “Each one of the athletes wants to perform better than the other. They feed off of each other and it makes a big difference.”

MTSU will be one of the teams to look out for in the Conference-USA Championship. Coach Hayes knows that it going to take a full team effort to win a conference title.

“We are going to get a lot of points in the distance races. So what can we get in the sprints? A lot of it is going to be what the other people do,” Coach Hayes said. “We have one high jumper. We have one triple jumper. It is going to come down to the events where we have one person as opposed to the races where we have two or three good runners competing,” 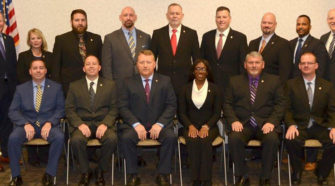