The Middle Tennessee Blue Raiders (31-4) are moving on to the Round of 32 to face the Butler Bulldogs after defeating the Minnesota Golden Gophers (24-10) with a final score of 81-72 Thursday night.

The Blue Raiders become the fourth team ever to be seeded 12th or lower and advance past the round of 64 in back-to-back years, joining Tulsa, Western Kentucky and Harvard in that group.

The Blue Raiders got off to an incredibly slow start, making just three of their first 15 shots. This allowed the Gophers to score the first seven points of the game. Giddy Potts broke the drought for MT with his only 3-point make of the half.

The Blue Raiders settled in and reeled off the next seven points to tie the game. Forward JaCorey Williams struggled early on, as Minnesota all-star Reggie Lynch gave him fits in the paint. Lynch, the second-leading shot blocker in the nation, picked up three early blocks on the Blue Raiders before picking up his second foul and sitting for the rest of the first half.

Once Middle Tennessee settled in and got into a rhythm on offense, they began to score consistently.

MTSU came out of the locker room with much more energy in the second stanza, using an 11-2 run to build their largest lead of the game at 57-40.

Senior forward Reggie Upshaw took over the game in the second half, scoring 17 of his game-leading 19 points to push the Blue Raiders to victory.

Minnesota refused to accept defeat and on the strength of a 14-2 run, they cut the Middle Tennessee lead down to four at 62-58.

Upshaw continued his solid play and made big shots when they counted. When all was said and done, the Blue Raiders walked away with an 81-72 victory.

JaCorey Williams brings the heart, energy and effort.@MT_MBB is sooo close to knocking off another Big Ten school in the NCAA Tournament. pic.twitter.com/QfB0QBaCzv

All hands on deck

When the Blue Raiders were stagnant early, it was the energy of the bench that propelled them forward. Only one player off the bench played and didn’t score, as the reserves combined for 22 points and 14 rebounds.

When the team needed energy, they turned to Aldonis Foote who immediately obliged. At the front of the team’s 1-3-1 zone defense, he helped shut down the Gopher offense, giving the team the time they needed to build a lead.

Walters was the biggest contributor off the bench, scoring ten points and grabbing six boards. His physical play in the post helped the Raiders get past an early stretch where the length of Reggie Lynch and Jordan Murphy really gave the team a tough time.

“[Coach] was telling me that I’m a big body, I’m a physical guy so tonight that was going to come into play,” Walters said after the game. “I had to come out ready to play and physical, moving my feet like I always do.”

At this point in the season, the bench is playing some of its best ball of the year when the team needs it most.

“If we had any kind of advantage, it’d be depth…it’s what’s made us good,” head coach Kermit Davis said. “You can’t win the number of games we’ve won with people getting nicked up, fighting foul trouble unless you’ve got a good bench.”

Minnesota’s leading scorer and Big-10 all-conference first-teamer Nate Mason to just five points on 2-of-10 shooting and only one three-point make for the game. Coming into the afternoon averaging 15.5 points a game, Mason was going to be crucial in order for Minnesota to win, but he couldn’t find his rhythm.

He struggled to guard MT’s perimeter players on the other end, as Blue Raider guards combined for 34 points.

.@MT_MBB clearly isn’t afraid of the Big Ten in the Big Dance. Tyrik Dixon knocks down the HUUUUUGE three. pic.twitter.com/zItI4v4IX7

Upshaw takes game over in the second half

With the game still hanging in the balance early, Upshaw exploded for 17 of his 19 points to lead MT to victory. The Chattanooga, Tennessee native also helped MT fight off a late run by the Gophers with an individual 7-0 run to extend the Blue Raider lead to nine.

For Middle Tennessee, Upshaw’s experience last year is part of the reason he and his teammates have been as successful as they’ve been.

“Reggie really made some great plays for us in a four or five minute stretch,” Davis said. “That team is a focused group, a great practice group…there was no doubt in their mind that they were going to win the game.”

The Blue Raiders will have a light practice tomorrow before facing the fourth-seeded Butler Bulldogs on Saturday in Milwaukee at the BMO Bradley Center. Game time is yet to be decided.

Previous March Madness playlists: What the Blue Raiders listen to before they take the court

Next New York Times presentation to take place on campus 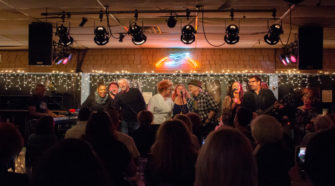