The 52nd annual Academy of Country Music Awards aired Sunday night in Las Vegas’ T-Mobile Arena. Few awards were actually given on camera, but the night was jam-packed with unforgettable performances.

The show quickly transitioned into a tribute to the late Chuck Berry. The honor was given to the show’s two hosts, Luke Bryan and Dierks Bentley, along with The Eagles’ Joe Walsh on guitar. Together, they delivered a high-energy tribute, singing Berry’s 1958 hit “Johnny B. Goode.”

Bryan and Bentley lived up to their hostly duties by providing jokes a-plenty. The humor was definitely centered around a night in Vegas they couldn’t quite remember. But, they promised the audience nothing less than a night they wouldn’t forget.

Nancy O’dell and David Copperfield presented the ACM for Song of the Year, the first award of the night. The ACM went to the incredibly talented … Emma Stone of “La La Land.” Yes, you read it right. It was a cleverly played Oscar bash that actually went to Thomas Rhett for his song “Die a Happy Man.”

An outstanding 23 performances took place within the three hours designated to country music. Sam Hunt was the first to deliver with his new single “Body Like a Backroad.” The MTSU alumni took a turn midway through his performance by stepping into the audience and serenading his fiancee, Hannah Lee Fowler. Hunt continued to sing his song while wrapping his left arm around her, breaking hearts all over the world.

As the night went on, many other artists took the stage: Dierks Bentley, Maren Morris, Jason Aldean, Miranda Lambert (who delivered a heart-breaking performance and took the ACMs for Album of the Year and Female Vocalist of the Year), Rascal Flatts, Keith Urban and Carrie Underwood.

Little Big Town went neither little or big with their performance — they went bold. They shared their song “Happy People” in a hippie-inspired way, adding fluid pops of color to the stage with their floral backdrop. The quartet was followed by another beloved country music group, Lady Antebellum. “You Look Good” was performed by Lady A, and it was delivered in a very brassy kind of way. It was this performance that stole the night and showed Vegas how to party country-style.

The performances continued with Brothers Osborne, Kelsea Ballerini, who sported a hot pink bodysuit that will likely show up on everyone’s hit or miss list, Chris Stapleton, Brett Eldredge and Luke Bryan.

“Twenty years ago, on the ACMs, this couple surprised the world with their very first duet ‘It’s Your Love.’ Tonight, they are here with the worldwide premiere of their new single ‘Speak To a Girl,’” Luke Bryan said as he welcomed the one and only Tim McGraw and his lovely wife, Faith Hill, to the stage.

The couple stuck to a very classy, stripped-down performance style. As the song progressed, the two were drawn closer to each other until they were completely locked into one another’s eyes, singing to each other as if they were the only two people in the room. To wrap it up, a hug and a kiss, along with a standing ovation.

“Forever Country” from artists of Then, Now, & Forever rightfully took home the ACM for Video of the Year. Stars such as Keith Urban, Carrie Underwood, Jason Aldean and many more flooded the stage, but it was Little Big Town’s Karen Fairchild that accepted the award on behalf of everyone in the video-making process.

“We are so happy to celebrate country music. I mean, what a rich heritage we have,” Fairchild said.

As stated previously, Jason Aldean was awarded the ACM for Entertainer of the Year.

In acceptance of his award, Aldean said, “I am so thankful. You guys don’t know how much I love getting up and doing what I do.” He went on to say, “Everybody, thank you guys. This is the coolest thing ever, man.”

The country party in Las Vegas ended on a high with the collaboration of Florida Georgie Line and the Backstreet Boys. They first sang their duet “God, Your Mama, and Me,” then later transitioned into the crowd-favorite “Everybody.” The energy level overtook the crowd with a roar. FGL and the Backstreet Boys even involved the audience with their performance. They focused on Tim McGraw’s moves, and they also showcased Carrie Underwood’s serious sing-along talent.

Bryan and Bentley left the show with their “when in Vegas” advice: “Go party, go gamble!”
View the complete list of awards here. 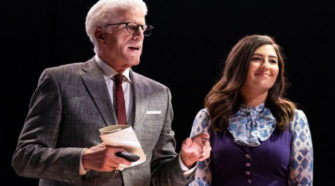 Review: ‘The Good Place’ is back, more extraordinary than ever before