Just like a family, country music artists stuck together in the 51st annual Country Music Association Awards, a theme that preeminently stood out at country’s biggest night.

The comforting lyrics of “Amazing Grace” spilled out of Eric Church’s mouth just before the spotlight shifted to Darius Rucker, who was accompanied by Keith Urban, in the launch of a soulful rendition of “Hold My Hand.” Backed by a small but mighty choir, Lady Antebellum soon chimed in until the stage opened to an overflow of artists who chanted Hootie’s lyrics in unison. The artists included Little Big Town, Reba McEntire, Kelsea Ballerini, Garth Brooks, Luke Bryan and more.

The number was ended by Rucker and received what would become the first of many standing ovations, a selfless act that proved the industry’s undying support for one another.

Brad Paisley and Carrie Underwood both walked out in red, prepared to take on their 10th year as the award show’s co-hosts. This year, though, they couldn’t dive into their usually playful spirit and intriguing jokes. Rather, Paisley and Underwood first acknowledged the world’s recent disasters.

“This has been a year marked with tragedy,” Underwood said before declaring the night’s dedication to country music fans. “The best way to honor our fans is to play our music, loud and proud,” Paisley added.

Paisley and Underwood’s opening monologue swiftly transitioned into the dynamic duo fans know and love by mocking CMA’s rule on the show being a “politics-free zone.” Paisley then proceeded to sing a comedic song titled “Before He Tweets” to the beat of Underwood’s 2005 hit “Before He Cheats,” which shed some hysterical light on President Trump’s infamous Twitter addiction.

“Yeah, we can’t do that one,” Underwood said before turning everyone’s attention to another lighthearted, made-up track, “Total Eclipse of the Garth,” which teased the Entertainer of the Year nominees — Garth Brooks, Luke Bryan, Keith Urban, Eric Church and Chris Stapleton.

Brittany Snow and Ruby Rose of the forthcoming “Pitch Perfect 3” were the night’s first presenters with Single of the Year, which went to Keith Urban for “Blue Ain’t Your Color,” a track written by Hillary Lindsey, Steven Lee Olsen and Clint Lagerberg. Meanwhile, Thomas Rhett warmed the stage with a performance of his current single, “Unforgettable.”

Though she didn’t attend, Taylor Swift took the CMA Award for Song of the Year. Little Big Town, the quartet that cut the track, accepted the award from presenters Bobby Bones, Karlie Kloss, Brett Young and Luke Combs.

Things took an unexpected but appreciated turn when Dierks Bentley and Rascal Flatts delivered a tribute performance to Montgomery Gentry’s late Troy Gentry with the duo’s “My Town.” Just when the final verse approached, Eddie Montgomery, Gentry’s musical partner, walked out twirling his microphone while everyone sang along in commemoration of Gentry.

In three back-to-back-to-back performances, country music icon Reba joined Ballerini on stage for a duet version of Ballerini’s single, “Legends.” Bryan followed with his single, “Light It Up,” and Miranda Lambert shared an old timey rendition of “To Learn Her,” a track off her 2016 album, “The Weight of These Wings.”

“Kevin Probably Saves the World” stars Jason Ritter — whose grandfather Tex Ritter was a founding member of the Country Music Hall of Fame — and Joanna Garcia Swisher presented the CMA Award for New Artist of the Year, which went to Jon Pardi.

Brooks was next to take the stage. He, too, performed his current single, “Ask Me How I Know,” and Brothers Osborne, who won Vocal Duo of the Year for the second consecutive year, immediately followed with “Ain’t My Fault” before transitioning into a Don Williams tribute with “Living on Tulsa Time.”

A steady stream of performances took the show over, which included anticipated collaborations and artists outside the country music genre. McGraw and Faith Hill began the performance frenzy with an admirable deliverance of their newly released track “The Rest of our Life.”

According to Paisley, to “make country music’s biggest night even bigger” P!nk performed her powerful “Barbies,” which was followed by Old Dominion with “No Such Thing as a Broken Heart,” and Little Big Town, who won Vocal Group of the Year, with a performance of “Wichita Lineman” in tribute to Glen Campbell, which featured Jimmy Webb on piano. Stapleton, who won Album of the Year for “From A Room: Volume 1 and Male Vocalist of the Year,” was up next and sang “Broken Halos” alongside his wife, Morgane.

Maren Morris welcomed former One Direction artist Niall Horan to the CMA Awards with a collaboration that began with Morris’ heartfelt “I Could Use a Love Song” and rolled into Horan’s “Seeing Blind,” a track from his 2017 album, “Flicker.”

Once again, the award show memorialized the industry’s lost ones through a breathtaking and emotional performance from co-host Underwood. Dressed in a full-length, white gown that gave her an angelic presence, the powerhouse sang “Softly and Tenderly,” which stood in remembrance of Glen Campbell, Don Williams, former CMA Executive Director Jo Walker-Meador and Troy Gentry, along with those who died in the Las Vegas shooting on October 1.

The performances continued with artists like co-host Paisley, Pardi, Dan + Shay with Lauren Alaina, Keith Urban with the debut of his new single, “Female,” which entails a heavy and powerful statement toward a woman’s image, and Eric Church.

Miranda Lambert led the night in nominations with five total, one of which, Female Vocalist of the Year, she claimed for the seventh time.

Alan Jackson awoke the star-studded crowd with his 1990 hit “Chasin’ That Neon Rainbow,” and as he finished he received a standing ovation.

Reba presented the night’s biggest award: Entertainer of the Year. For the second consecutive year, Brooks took the title.

“Getting this presented to me by the entertainer of a lifetime, I thank you, Miss Reba,” Brooks said as he accepted the award.

To conclude the 2017 CMA Awards, Jackson returned to the stage, which he shared with the night’s co-hosts, Paisley and Underwood, and joyously sang “Don’t Rock the Jukebox.”

Off to a slow and incredibly sincere start, the night quickly gained traction and warmed the hearts of those in support of the country music community. 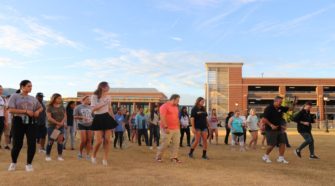