More than a week after the death of 26-year-old rapper Mac Miller, fans and friends work to reconcile the loss through provocative dialogue about substance abuse and mental health. Miller, known for his transparency in discussing such issues, has left behind no shortage of relevant music, video and interview content to contribute to the growing dialogue. The artist’s death followed the release of bleak statistics charting total overdose deaths in the nation last year.

Miller was confirmed dead on Sept. 7 at his home in Studio City, California, where first responders found him in cardiac arrest. There was no evidence of drugs at the residence save for a small amount of white powder. The Los Angeles County Department of Medical Examiner-Coroner has yet to release an official cause of death.

Miller was scheduled to shoot a music video the day he died. He had just released his fifth studio album, “Swimming,” on Aug. 3 and was set to begin touring in October. This latest release consummated a prolific rap career.

Miller, born Malcolm James McCormick, first began rapping at age 14 as “EZ Mac,” and by the age of 18 had rebranded himself and signed a record deal with Pittsburgh label Rostrum Records. In November 2011, Miller released his debut studio album, “Blue Slide Park,” and embarked on his first tour, which was sold out at every single location. He was featured in XXL magazine’s “Freshman Class” list that year.

In addition to five studio albums, Miller released 12 mixtapes, two EPs, one live album and numerous singles. With such a prolific discography, Miller rapped about anything and everything. His lyrics never shy away from intimate details and personal struggles, especially those related to substance use.

“It felt like I was growing up with him to an extent,” said Keelan Jefferson, 22, a longtime Miller fan. “When he was doing drugs, I did too. So I understand the pain and struggle.”

Jefferson, who has been listening to Miller for nearly eight years, has seen the rapper’s struggle with drugs reflected in his own life and the lives of his friends. Jefferson admitted most of his friends do drugs, but he struggles to understand why.

“We shame people for their choices instead of finding out why we do these things and how to do them safely or eradicate the behavior entirely,” Jefferson said. “Overdoses won’t stop until things can be regulated and people start seeking treatment or sit down to understand ourselves and how we operate.”

On Aug. 15, the Centers for Disease Control and Prevention published statistics that estimated a record-breaking 72,000 deaths caused by drug overdoses in 2017. This figure is larger than the total of deaths related to HIV, car crashes, and gun violence, according to the New York Times. You may be wondering why the Disease Control center is looking into these statistics or even questioning, is addiction a disease? The answer is yes and it’s important for these professionals to monitor the epidemic so that appropriate data can be collected so that something can be done to control the epidemic and minimize the effect it’s having on the US. 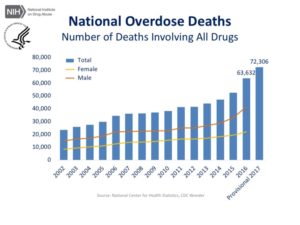 Why is substance abuse increasingly rampant? Some attribute it to rap music and its surrounding culture, especially in regard to its rise to a cornerstone of pop culture.

“People think it’s cool because everyone sings about it,” said Nashville resident Jannah Parrish, 20. “That’s why everyone in this generation is starting to die, because of the drugs and normalizing the drug culture.” 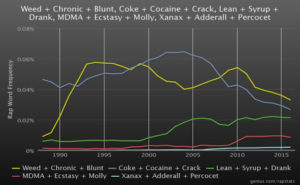 The total figure of references to “coke,” “cocaine” and “crack” is the only one which has seen an overall decreasing trend since the birth of hip-hop in the ‘80s. Every other category Genius defines, however, has seen a general increase. Successive data has not yet been released, nor does the current data include the many cultural nicknames assigned to reference the drugs listed in the above infographic.

Parrish believes that drug use in millennials is often an attempt to self-medicate, an assumption which is supported by the Genius statistics. Miller exemplified this in his 2016 documentary, “Stopped Making Excuses.” He admitted that he used drugs to numb himself and that he would probably never stop doing so. The rapper did draw the line at overdosing, however, saying, “You don’t go down in history because you overdosed. You just die.”

Contrary to his own statement, Miller’s life and death will go down in history, especially as people continue to examine his life, work and death. Before Miller became periodically sober in 2015, he explained that he was conscious of the legacy he would leave behind. He intentionally created a massive library for his fans, acknowledging the fragility of life and the inevitability of death. Despite his substance issues, Miller never formally entered a rehabilitation facility for his drug issues. These places are seen as very constructive for recovering addicts, so if you are experiencing any substance issues of your own or know somebody that is, you may want to refer them to one. Furthermore, if you are involved in or know a couple that is battling addiction, you might want to check out a place like couples rehabs, who specialize in drug rehabilitation for people in relationships. This can make the whole rehab process much easier by allowing you to recover as a pair.

Miller’s death has already made positive waves in the drug epidemic. Nightfall Records organized a public vigil in his hometown of Pittsburgh, where multiple nonprofit organizations were invited to attend and speak on mental health and addiction.

Asking for help is not always easy, which is why some people may feel like turning to drugs is the answer. But that isn’t the case. There are many people out there willing to give anyone struggling with mental health a helping hand. Initially, it may be daunting, but it could be as simple as checking out sites like HoneyLake.clinic, in the hopes of visiting a specialist facility where anyone suffering from addiction (or other mental health issues) can find a way to get through this. This may be the first step in getting life back on track and finding a better way of coping with life’s struggles. The death of Mac Miller may be an eye-opener for many people when it comes to substance abuse.

Miller’s discography is a vivid narrative of his struggles with mental illness and drug use. From the drug-fueled party vibe of “Watching Movies With the Sound Off” to the focused lyricism of “GO:OD AM,” fans joined Miller for his journey through life. Many listeners were in tune to his personal struggles and could relate to the difficult coexistence of mental health issues.

One such listener is Bahy Habib, who believes it is crucial to reflect on Miller’s life within the context of the relationship between mental illness and drug use. He says the best way to honor the late rapper is to think of Miller’s drug use as a coping mechanism for depression and anxiety in the same way that medical professionals prescribe medications for mental illness, and would allow people access from sites such as Blink Health for those medications that they need.

“We need to talk about what he did and learn from his life instead of making it an issue of pop culture, drug culture and legality,” Habib said.

Habib went on to say that mental struggles and self-medication are highly subjective to the individual. He argues that people should view Miller’s death as a potential learning tool rather than a possible social commentary. Celebrities are always sensationalized, but Habib emphasized the importance of the artist’s personal life and experiences as something to be learned from rather than be exploited.

Miller exemplified the very real daily struggles of someone fighting against mental illness and substance dependence. His music can be viewed as a resource, a first-person account of a uniquely 21st-century phenomenon of music, drugs, illness, fame, life and death. Some of his content rings truer now than ever before:

“Take my time to finish, mind my business

A life ain’t a life ’til you live it

Weight of the world, I gotta carry my own

My own, with these songs I can carry you home