There’s a saying about writing the horrors of war. You don’t write the big picture: the fires, the screams, the unstoppable force of decimation. No—you write about the small details. The ash coating a child’s cold cheek. The silent tears of a numb mother. The empty space of a once thriving home.

But these details, horrific as they are, are worlds away from Tennessee, and an almost alien concept to the routine lives of many students at MTSU. But for Kurdish-American MTSU student Dirhat Mohammed, this seemingly foreign world is steadily becoming the only one he knows.

There aren’t ashes or children or bombs around him. There aren’t soldiers or tanks or missiles leveling his home.

No—all he has is dread and a distinct awareness of his own mortality.

His thumbs aren’t coated in ash, but they twiddle in anticipation of what’s to come.

After days of Turkish assaults on the SDF, a five-day cease fire was negotiated by Turkish President Recep Tayip Erdoğan and United States Vice President Mike Pence in an attempt to pause Turkey’s incursion on Kurdish-held areas of northeast Syria. Although the cease-fire ended on October 22, shells continued to fall the entire time on civilian populations scattered throughout the region, even as President Trump touted the agreement as a victory and a “great day for civilization.” Turkey’s Communication Director Fahrettin Altun even tweeted a countdown to the Kurds’ removal, saying “The terrorists have another 15 minutes…”

The deal, Trump said, couldn’t have happened without the stark onslaught of violence against the Kurds. “Without that gunfire going back and forth, without those rockets going in both directions, without other countries moving in and potentially moving in and creating virtually a world war—without all of that happening, you would’ve never been able to make this deal,” he said, in an address from Fort Worth, Texas.

“They couldn’t get it without a little rough love, as I called it,” he continued. “I just put out — they needed a little bit of that at the beginning…When those guns start shooting, they tend to do things. But I will tell you, on behalf of the United States, I want to thank Turkey…This is an incredible outcome.”

Trump’s “incredible outcome” stands at odds with the deals being brokered at the expense of the Kurds’ very lives: Russia and Turkey reached an agreement on October 22 that solidified their power in the region, as they deployed forces in the vacuum left by the United States’ hasty withdrawal. Turkey is to get sole control of the areas captured in the invasion, while the remaining parts of the border region will be run by a mixture of Turkish, Syrian and Russian forces.

Kurdish SDF had just 150 hours to withdraw from the entire northeast border of Syria.

After October 29, forces comprised of Russian-Turkish patrols will begin sweeping along a six-mile strip of the border, searching for remaining Kurds. It is unclear what violence will ensue after this date. 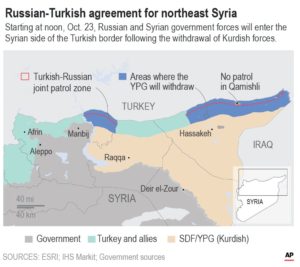 Trump’s statement of a “great day for civilization” was also news to Mohammed, a junior pre-med and biology student at MTSU with a bright demeanor and a charismatic smile. At first glance, he is a model member of the MTSU community: as a member of the Blue Elite, a student ambassador for the university and a former member of the Band of Blue, he seems to be completely immersed in the MTSU atmosphere.

But what isn’t obvious is that Mohammed spans two worlds: that of Murfreesboro, Tennessee, and that of the Kurdish Regional Government of northern Iraq. Although born and raised in Nashville, Mohammed is the son of two Kurdish refugees who fled Kurdish genocide in northern Iraq during the 1980s. He currently serves as the president of the Kurdish Professionals Student Association on campus.

With this background, he was already intimately aware of the violence that can rip cultures, homes, and families apart. And in light of recent events, these feelings are only becoming solidified.

His thumbs continue to twiddle with nervous energy as he tells his story.

“It’s different hearing stories about how my parents (were) when they were children and how their lives were,” he said sadly. “And now seeing it happen again, and I’m seeing it and keeping up with it on the news—it’s kind of scary, because it’s similar to what happened before.”

Between the years of 1986 and 1989, there were an estimated 50,000 to 100,000 Kurds slaughtered in the ‘Anfal’ campaign, headed by Ali Hassan al-Majid, a cousin of Iraqi president Saddam Hussein. The Anfal campaign consisted of intense aerial bombings, massive ground offensives, firing squads, chemical warfare and the systematic decimation of Kurdish settlements. This horrific operation displaced an estimated 3.5 million Kurds on top of the thousands of deaths, and numerous mass graves have been found scattered throughout the region, making the official death toll innumerable.

Several thousand of those Kurdish refugees were eventually resettled in Nashville, which is now home to the largest community of Kurds in the United States. According to City Lab, there are about 15,000 Kurds, with the majority located in South Nashville, which has acquired the name Little Kurdistan.

Mohammed’s worry that current events are mirroring the past is evident—and he worries that America is allowing it to happen.

“In my mind, it’s nothing different. It’s just another active (attempt to abandon) the Kurds,” he said. “And now it’s just a matter of time for something to happen to make (the invasion) stop. And the cease fire is not stopping it.”

Mohammed is relieved that no one in his extended family has been forced to flee Syria, as most of his family is still in northern Iraq. But to him, family ties don’t matter.

“I don’t see it as the Iraqi Kurds’, Syrian Kurds’, Turkish Kurds’, Persian Kurds’ problem, I see it as a Kurdish problem,” he said with vigor. “They’re just as much my people, just in a different host country. As an American Kurd, it is affecting me, as it is playing off of both sides of who I am: an American and a Kurdish person.”

He does agree that the United States was put in a tight position, as NATO allies with Turkey and long-time allies of the Kurds.

“I’m seeing it as an American, in the sense of ‘Okay, our troops have been there forever,’ and there’s that part of the story,” he explained.

He paused, and straightened as he gestured with his phone. “But then I see it as ‘Civilians are under attack.’ Watching videos and news articles and just hearing mother’s cries—that can be depressing.”

Although Mohammed is separated from this action through thousands of miles and his phone screen, he says the sense of desperation is trickling into his everyday life.

“My whole fall break consisted of me just keeping up with the news…It’s affected me, knowing that they’re just as much equally Kurd as I am, blood-wise, and they’re suffering.”

It is estimated that over 300,000 Kurds were displaced from their homes in less than two weeks, and at least 436 are confirmed dead. That number is expected to rise as villagers dig through the rubble of shelled towns.

“The Turkish people just keep coming in to those towns on the border, so (the Kurds) are leaving their homes and they don’t know where to leave to,” Mohammed explained with obvious despair. “The Kurdistan Regional Government of Iraq on the border towns in Iraqi Kurdistan (are) opened up to refugees. They had been opened for people who were running away from ISIS, and now it’s open to people running way from the Turkish government and their military.”

Mohammed paused, his shoulders drooping. “I’m just as much Kurdish as them. I could have been in their shoes if I was on that side of the world. “

Although Mohammed’s position in America has protected him from this violence, it has not protected him from words. Specifically, those of the president. The fervently polarized attitude toward the Kurds that has been amplified—seemingly solely—by Trump is something that Mohammed is struggling to come to grips with.

“I’m currently speechless on what I would say to Donald Trump,” he said fiercely. “If he was to be in front of me I would probably go blank. So much has gone through my mind. The Turkish government doesn’t refer to them as ‘Kurds’ or as ‘people,’ they see them as terrorists. And Trump thinks that it’s right…He’s completely changed the way he speaks about Kurdish people since last year. He’s gone from talking about us as friends to (being) ‘no angels,’ so I don’t know what changed within the (past few weeks), but something has definitely changed since then.”

But if words can go one way, Mohammed believes they can still tip the scales the other way as well. As an activist himself, he fervently suggests readers speak up and reach out, in any way possible.

“They can reach out to local politicians, state politicians, or those that are in the federal government,” he said. “Even if it’s just writing a short one-page letter or calling them.”

Mohammed has already reached out to U.S. Senator Marsha Blackburn, and plans to get in touch with others in government.

“Once you be quiet and stop raising awareness, that’s when (the issue) dies out and nothing gets done,” he said, with a steely gaze. “The more we keep talking about it, the more I feel like something will get done.”

By the end of the conversation, Mohammed’s thumbs are no longer twiddling.

You can find an abridged version of this article in Sidelines’ next print edition, to be distributed this week on racks across MTSU’s campus.

President Trump impeached on abuse of power, obstruction of Congress