The first, a Chinese New Year concert featuring the Jinling Dragon ensemble and a pre-concert reception, was scheduled for January 28 in the Wright Music Building. The second, set for early February, would have featured the Zhou Family Band.

“Even though artists and staff involved with the events are in good health and have not visited or have come in contact with those from any infected areas, we are canceling these events to allay any possible concerns,” McPhee said in his statement.

Officials from MTSU Student Health, as well as the Office of International Education are also closely monitoring the spread of the coronavirus, in light of the many international students with familial ties to the affected areas.

“The University has roughly 130 Chinese international students on campus this semester, with about 20 identified as being from or near the most impacted areas,” said Jimmy Hart, MTSU’s director of news and media relations.

According to McPhee’s statement, University Medical Director Dr. Eric Clark has given these student “specific information” to help them better understand the symptoms and warning signs of the virus.

Also according to the release, as of Jan. 28, no students have been identified who have traveled to one of the impacted areas within the past 14 days and have exhibited symptoms of the virus.

“Both presence in the area and the presence of the physical symptoms must be present to indicate the need for further testing,” McPhee said. “We will continue to carefully monitor at risk students until we pass the 14-day period.”

A third event that could be impacted is a faculty-lead study abroad trip that was scheduled to leave for China on May 11. A decision regarding that trip will be made over the next few days, according to Hart.

Coronavirus is a respiratory illness caused by a new type of virus from the coronavirus family. Identified by Chinese authorities on January 7 and labeled “2019-nCoV,” this strain has never been encountered before. There are other types of coronavirus, ranging from common colds to severe acute respiratory syndrome (SARS), and Middle Eastern respiratory syndrome (MERS). In 2002, SARS spread to 37 countries, causing global hysteria as it infected more than 8,000 people and killing more than 750. MERS seems to transfer to people less easily, but possesses a much higher lethality rate, killing 35 percent of around the 2,500 people who were infected.

This new coronavirus, though? It’s breaking the mold. First identified in Wuhan, Hubei Province, China, the new coronavirus made the unprecedented jump from infected animals to people. Many people who were infected either worked or shopped in the Huanan seafood wholesale market in the Chinese city, which also sold live and newly slaughtered animals.

The virus has resulted in thousands of confirmed cases across China, while additional cases are popping up in Europe and the United States. The death toll in China is currently 304, according to the National Health Commission. 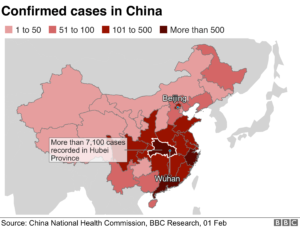 According to the World Health Organization, symptoms include cough, fever, shortness of breath and breathing difficulties.

In some cases, though, it can even lead to pneumonia, kidney failure and death.

The incubation period of the coronavirus remains unknown, though some scientists believe it could be between 10 and 14 days.

The World Health Organization has declared it a global health emergency.

International Students from around the world welcomed to MTSU